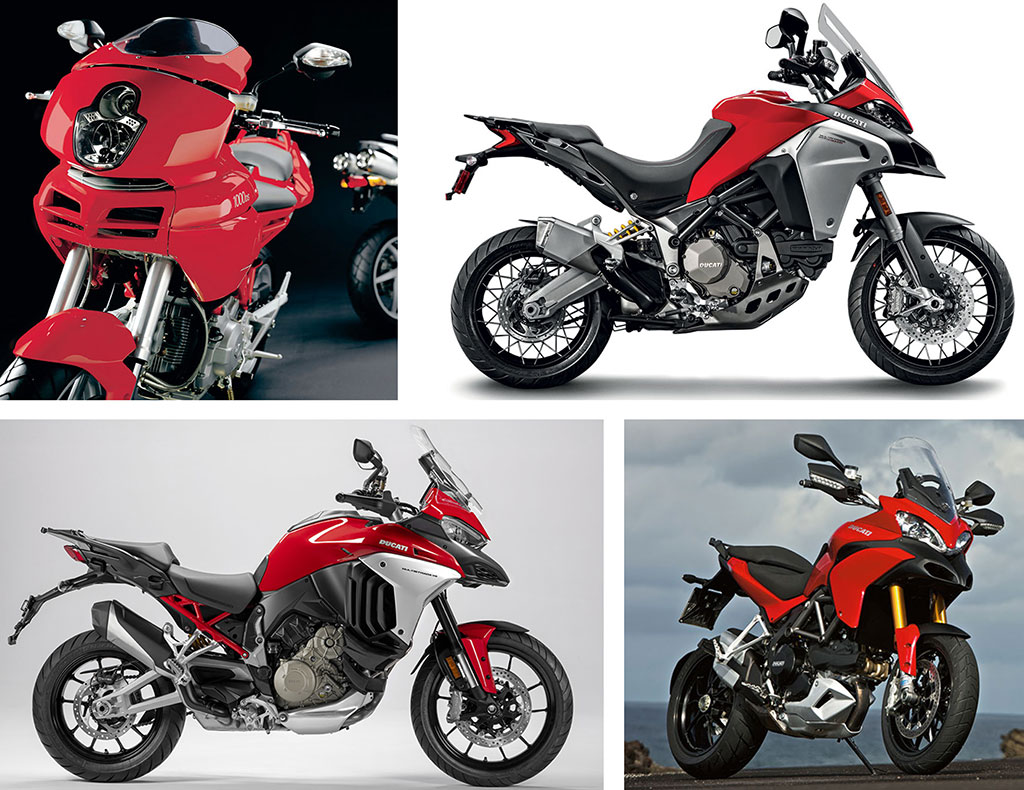 Insights and tests of the Ducati Multistrada, from the first 1000 DS by Pierre Terblanche to the latest versions today.

In this article we see all the models of the Ducati Multistrada,retracing the history of the Sport Tourer of Borgo Panigale and providing links to the tests and insights present on cuoredemo.com. The content is constantly updated, with the intention of keeping up with the news and integrating the list with additional chapters. With the Multistrada, Ducati invented in 2003…

In this article we see all the models of the Ducati Multistrada,retracing the history of the Sport Tourer of Borgo Panigale and providing links to the tests and insights present on cuoredemo.com. The content is constantly updated, with the intention of keeping up with the news and integrating the list with additional chapters.

With the Multistrada, Ducati invented in 2003 a new type of motorcycle with a model that made versatility, hence its name, its strong point; in fact, a Multistrada has always been able to face any type of road, adapting to the various routes, with a strong personality, a tourist motorcycle comfort, but, at the same time, with sporty performance.

All characteristics that have gradually evolved and strengthened, up to propose, with the most recent versions, actually multipurpose motions; this is also thanks to the introduction, in 2010, of the four-valve engine and efficient electronic management with the famous four riding modes.

Like the
Monster phenomenon,
therefore, Multistrada also had the ability to break with the usual schemes, presenting itself on the market as something actually new, combining in a single bike a road enduro setting with a typically Ducati sports soul.

An uncompromising bike that, since the first model designated by Pierre Terblanche,certainly does not have the characteristic of being able to please everyone, because it is an innovative proposal, of great personality that has opened a new market segment.

A courageous bet, therefore, but also very successful if we count the years of his stay on the price list, despite the obvious changes due to the various evolutions for performance and equipment, but identical in pursuing the spirit and philosophy of that first prototype presented at that made so much discussion and that seemed like a simple exercise in style, something to relegate among the many projects that will never come to light.

Of light, however, Multistrada has seen so much, as evidenced by the passion and satisfaction of the thousands of enthusiasts who have been lucky enough to drive it through the streets of the world.

“Multistrada represents a whole new niche. It combines the performance and design of a sporty bike with the flexibility and practicality of an Enduro-style motorcycle”.

With these words David Gross, then Ducati’s Strategic Planning Director, presents at Intermot 2002 ducati’s new and courageous proposal. The pencil is that of Pierre Terblanche and designs shapes that still make people talk about themselves, but, design aside, the Multistrada 1000 is a motorcycle with a first-class technical equipment, starting from the suspension and a great engine: the Desmodue 1000 with double ignition. 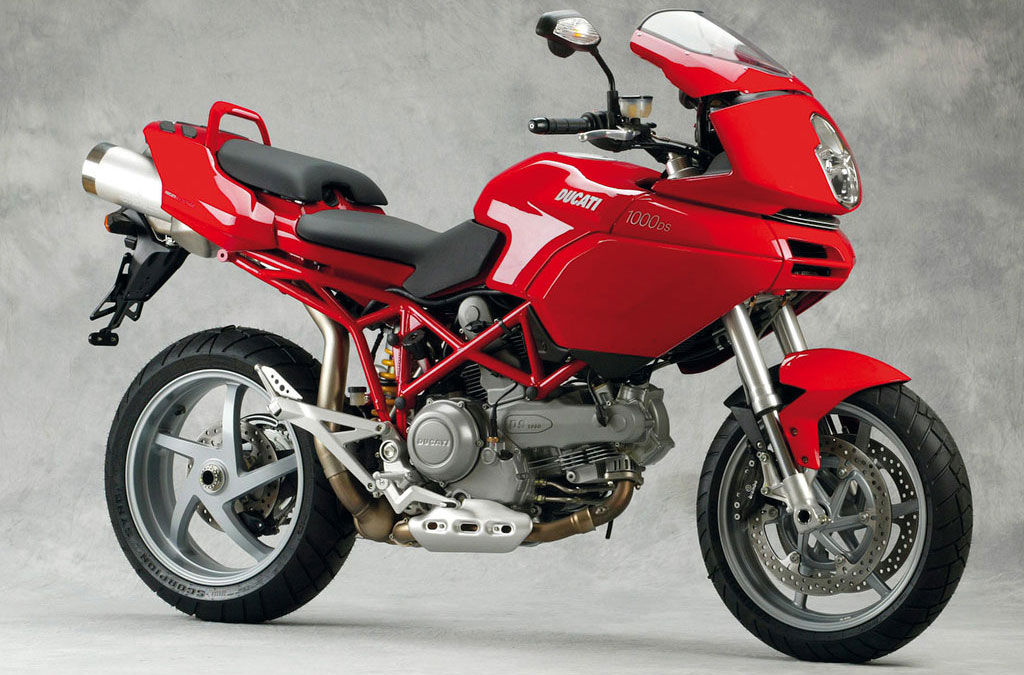 Versions of this first model are the 1000 DS and 1000S DS, with Ă–hlins suspension identical to those mounted on the 999 S and other racing elements.

Go to the monograph of the Ducati Multistrada 1000

The Ducati Multistrada 620 is equipped with the Desmodue 618 cmÂł, certainly less brilliant than the one mounted on the first model of 2003, but able to support even demanding tourist projects, seePaolo Pirozzi’s incredible journey through Asia.

The biggest aesthetic difference compared to the 1000 is undoubtedly the swingarm, in this case a classic two-arm, made with Hydroforming technology. The 620 also lost its lung under the engine, probably useless given the small displacement.

With its 183 kilograms, 13 fewer than the 1000, the small Multi is even more balanced, and the handling improved. Slimming care also involves the tank, five liters less, but still able to guarantee a good autonomy, given the 15 liters of seal and the non-excessive consumption. 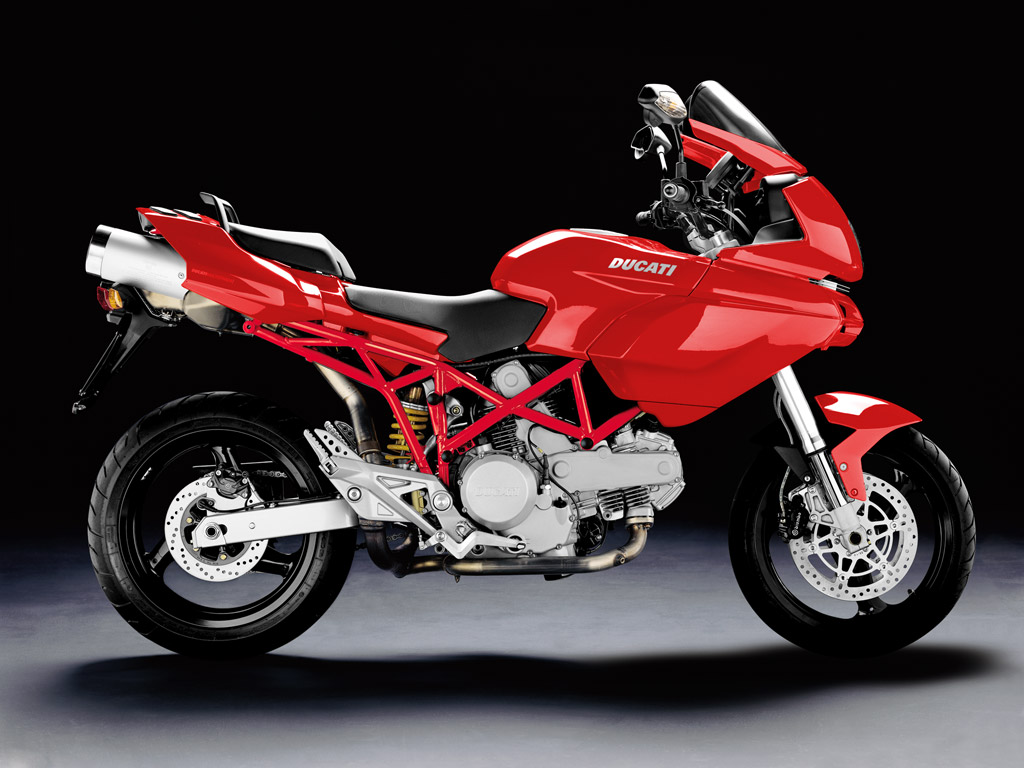 In addition to the 1100 cc engine two air-cooled valves, the Multistrada 1100 features a different elastic handlebar fastening that guarantees an improvement in driving comfort, a new Euro 3 exhaust and ad hoc software for the multifunction dashboard.

It is the first Ducati to mount the 1100 DS,which in this specific case does not provide a significant increase in power compared to the 1000, but fills the bottom delivery with so much more torque. 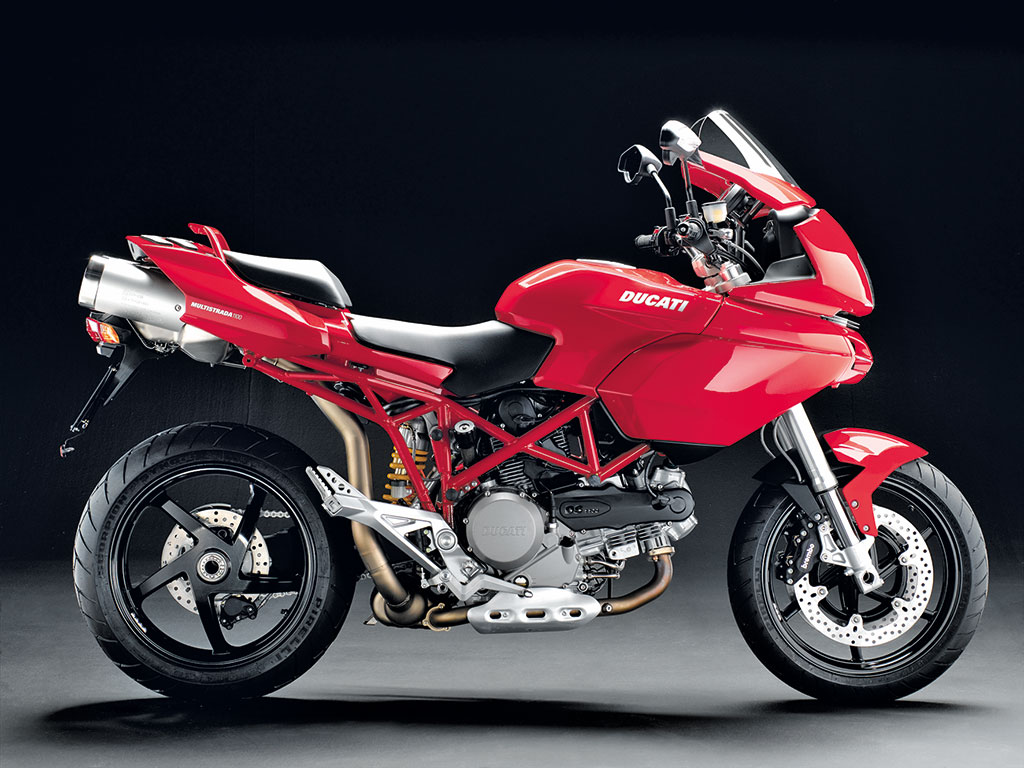 Also in this case next to the basic version there is the Multistrada 1100S DS, which stands out for its front fender and carbon fiber belt covers, the variable section aluminum alloy handlebar, as well as for the Ă–hlins suspension derived from Ducati Superbikes.

Go to the monograph of the Ducati Multistrada 1100

The Ducati Multistrada 1200 makes its first appearance at the 2009 Milan Motor Show. There was great anticipation for this model and Ducati did not disregard expectations, presenting a model that is actually a new concept of motorcycle: riding modes, and electronic suspension make their first appearance on this Multi and the lines, far from those little digested by the most of the first series, become aggressive and elegant.

The versions of the Multistrada 1200 are the base and the S, which mounts Ă–hlins suspension with DES (Ducati Electronic Suspension) and ABS standard system. The S is dedicated in sport fittings,with some carbon fiber and Touring accessories,with side bags, heated knobs and central stand.

Bilbao is presented with the Ducati Multistrada 1200 MY 2013,which does not suddenly make the previous one look old, but puts even richer and more interesting contents on the scale, based on a survey conducted among the owners of the Multi-road MY 2010. Ducati has improved the tourist side of the bike, putting a lot of technology at the service of driving comfort and safety with the DSP (Ducati Safety Pack, which includes abs and electronic traction control).

The most important innovations are the Skyhook Suspension system,the latest generation Bosch 9ME abs and the 11Â° DS narrowhead.

For the Multi-road 1200 Model Year 2013,the Casa di Borgo Panigale has provided four versions: the Base (without the Skyhook system), the S Touring (which in MY 2010 configuration was the best-selling), the Gran Turismo (equipped with specific tires, additional headlights, higher handlebars, further increased plexiglass, engine protections and top houses) and the Pikes Peak (with various carbon pieces, including the low windshield, Marchesini rims of similar design to those of the 1199 Panigale and kit composed of single-outlet Termignoni exhaust system and dedicated control unit).

The 2015 Multistrada 1200 takes a decisive step forward, with the DVT Narrowhead and a lot, a lot of electronics.

The bike boasts 160 Hp of power and 136 Nm of torque,so there is material to have fun, but thanks to the refined electronics and the new engine, the tour and relaxed guide is the one that benefits most from the numerous innovations introduced.

The ABS becomes “cornering”, with an increase in braking safety even with a bent motion or with a particularly treacherous bottom, then DTC, DWC, hands free system for ignition, cruise control and of course the four riding modes. 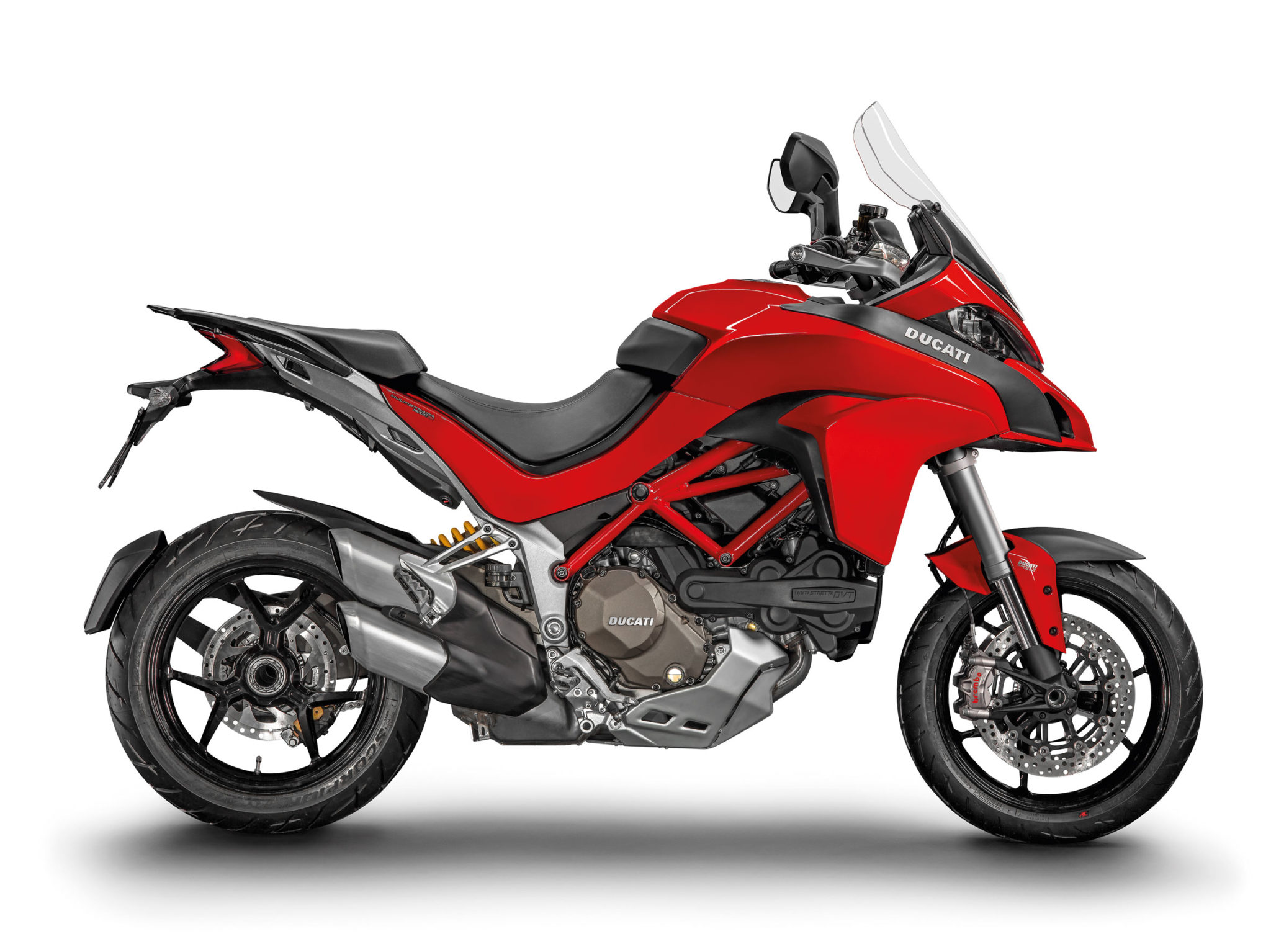 The technological goodies (not all available on the basic version) are really many and of the highest level, but the most important novelty is the introduction of the inertial measurement unit (IMU) inertial platform that performs the task of control cabin in the complicated network of components, between sensors, actuators and control units.

The Enduro uses the same chassis as the Multistrada 1200, but is flanked by a new two-arm swingarm. The engine is always the Ducati Testastretta DVT (Desmodromic Variable Timing) of 160 horsepower approved Euro 4 and equipped with a new exhaust system. 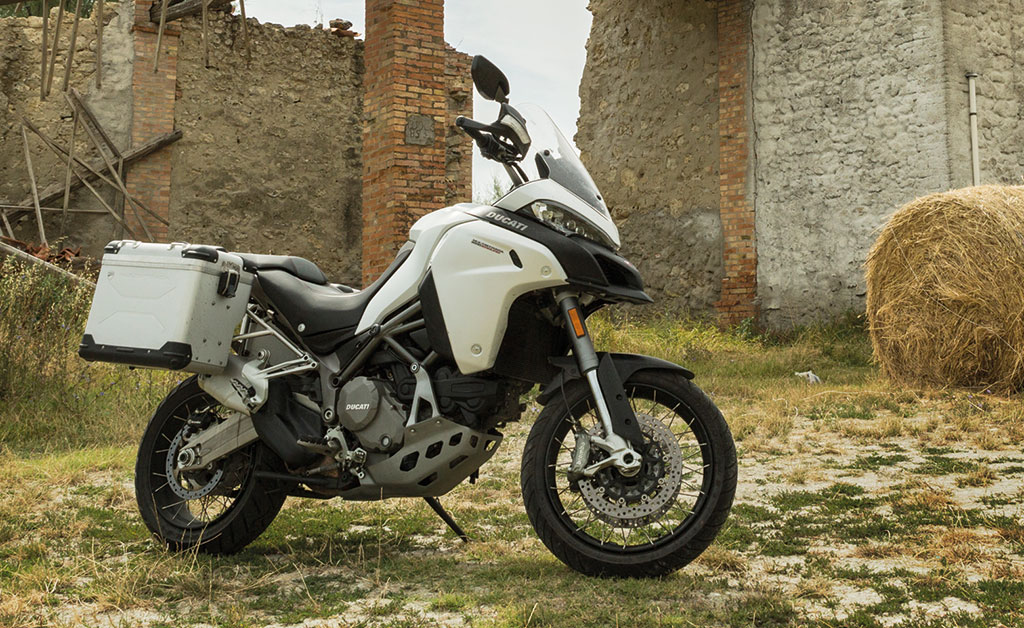 Thanks to the four Riding Modes (Enduro, Touring, Sport and Urban), the Enduro is a true multibike, further expanding the concept of versatility of use typical of the Multistrada family.

As was the case for the Ducati Multistrada 1000, which was followed by the more accessible and less demanding 620 cc model, even for the Multi 1200, although with a little more calm, comes the younger sister. 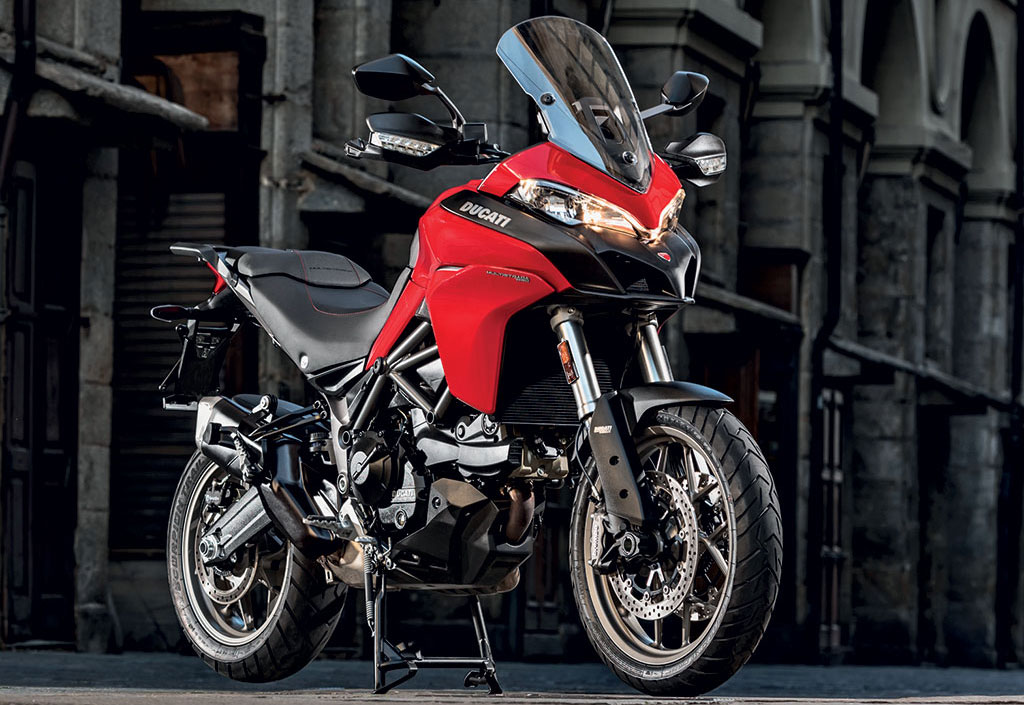 The Bosch ABS,adjustable on three levels, and dtc tractioncontrol, adjustable on eight levels form the Ducati Safety Pack,included in the standard equipment. The 4000 euros savings on the purchase price compared to the 1200 leave out the IMU system and with it the ABS cornering and the semi-active Suspension Skyhook.

As for the suspension we find an adjustable Kayaba fork with 48 mm inverted stems (the same as the 1200 Base, but with a different calibration) and a Sachsshock absorber, also fully adjustable.

Four sets are proposed: Touring, which includes the central stand and side bags, Sport with Termignoni exhaust and some aluminum accessories obtained from the tank, the set-up Enduro, which provides for two additional faretires, steel pipe paramotor, radiator protection grille, offroad platform set and finally Urban counting on a rear trunk and tank bag ideal for holding your smartphone and its charger.

Go to the full test of the Multistrada 950

In 2018, Multistrada takes another step forward. We cannot talk about a new model also because the family feeling that binds the last two generations remains unchanged: under the dress, however, the Multistrada changes a lot because it is new in 30% of the components.

Going into detail, on the new 1260 change engine, cycling, electronics, equipment: the result is that the versatility of the bike also varies, increased in every situation. 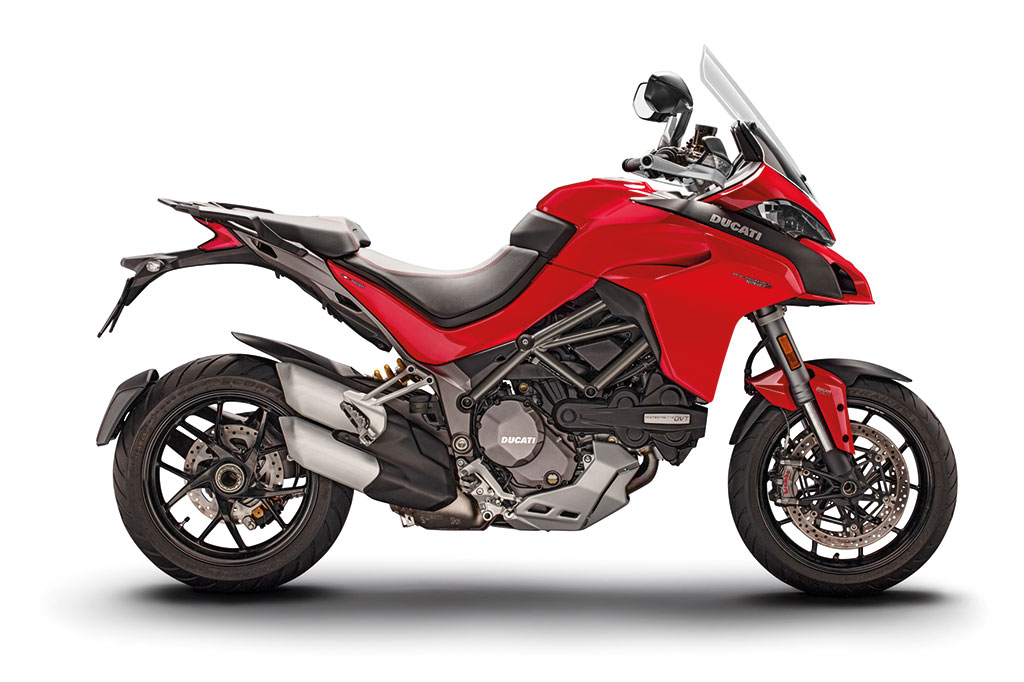 The engine is the 1262 cc DVT narrowhead, which guarantees more torque at medium/low speeds, those widely used on the road.

The suction and the entire exhaust system have been revised, as well as the gear linkage and the sensor for the Quick Shift.

The electronic equipment is wide, based on the IMU inertial platform and composed of Bosch Cornering ABS, Ducati Wheelie Control (8 levels), Traction Control (8 levels) and cruise control. On the 1260 S, there is also the Ducati Skyhook Suspension (DSS) Evolution system.

The Vehicle Hold Control,the system that avoids involuntary motorcycle setbacks by facilitating stationary restarts in critical conditions, is standard on all versions, while the electronic gearbox with Up & Down functionality is standard on 1260 S and 1260 D|Air, while it is optional on the 1260.

There are also four driving modes (Sport, Touring, Urban, Enduro) the first two with full power (158 hp), the others with a power limited to 100 hp.

The proposed versions of the Multistrada 1260 are the base, the S, the S D|Air and the sporty Pikes Peak.

After two years in which it almost seemed that the Multistrada 950, as it is smaller, deserved to be less rich than the rest of the family, finally comes the new Multi 950 and above all the long-awaited “S”â€“ inspirational letter for ducatists â€“ which promotes the “small” Multistrada in the category of the big ones. 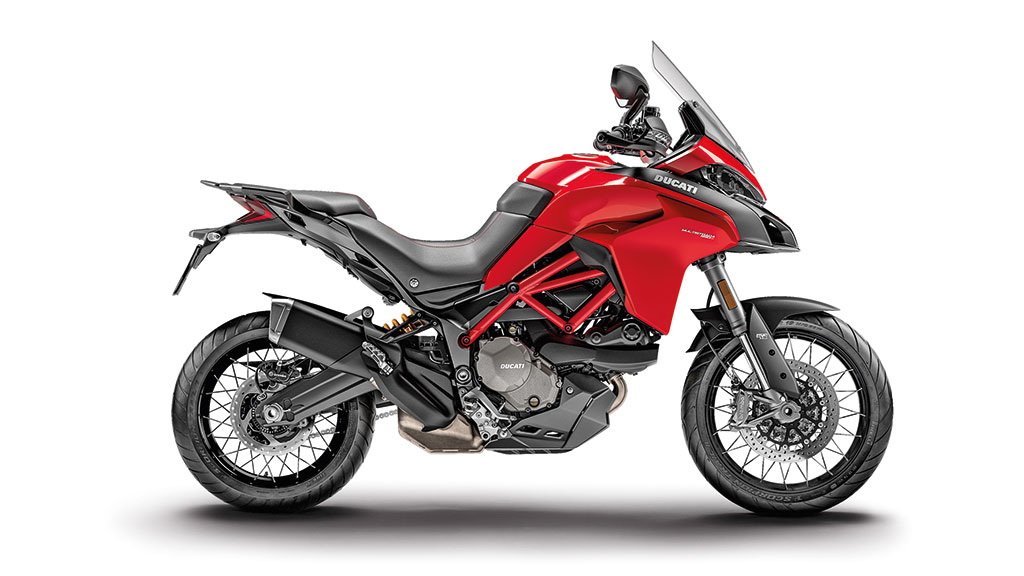 In 2020 comes a new break with the models of the past and the fourth generation of Ducati Multistrada is born.

The Multistrada V4 is mainly concerned with the abandonment of the desmodromic system, a pillar of the identity of the Borgo Panigale brand. 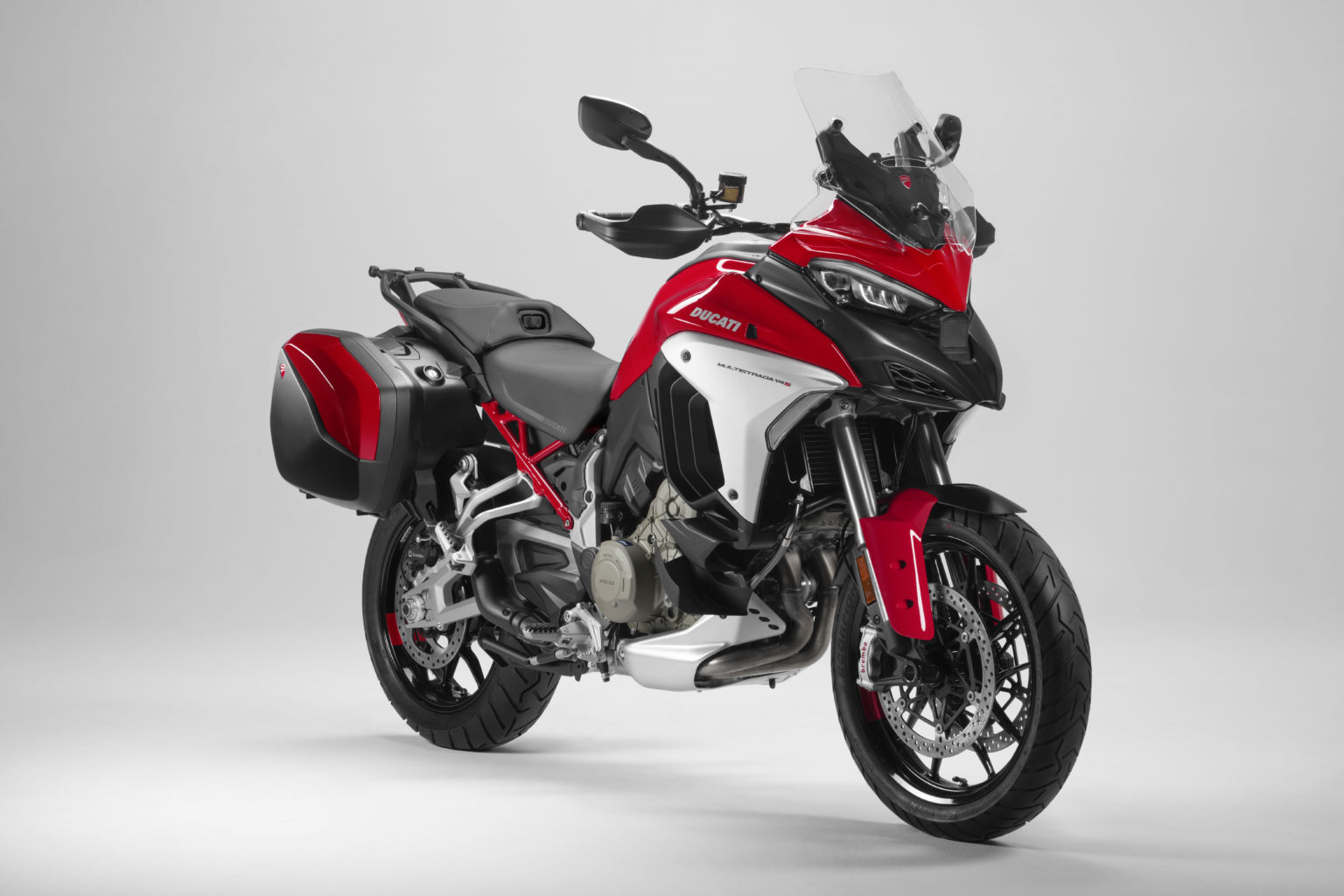 The engine is the V4 Granturismo with a displacement of 1,158 cm3

The electronics of the Multistrada V4 are at the highest level. The inertial platform (IMU) manages the operation of ABS Cornering, Ducati Wheelie Control (DWC), Ducati Traction Control (DTC), here in cornering version and, on the Multistrada V4 S, the Cornering Lights (DCL).
Also on the V4 S multi-road vehicle there is also as standard vehicle hold control (VHC), and the Ducati Skyhook Suspension (DSS) with Autoleveling function.

With the Multistrada V4 Ducati introduces an absolute preview in the world of motorcycles: the front and rear radar system, which allows the use of Adaptive Cruise Control (ACC) and Blind Spot Detection (BSD).

The Multistrada V4 is equipped with a single-shell aluminum frame, 19-inch front wheel and two-arm swingarm.

Multi-road V4: test of the new Ducati with granturismo engine