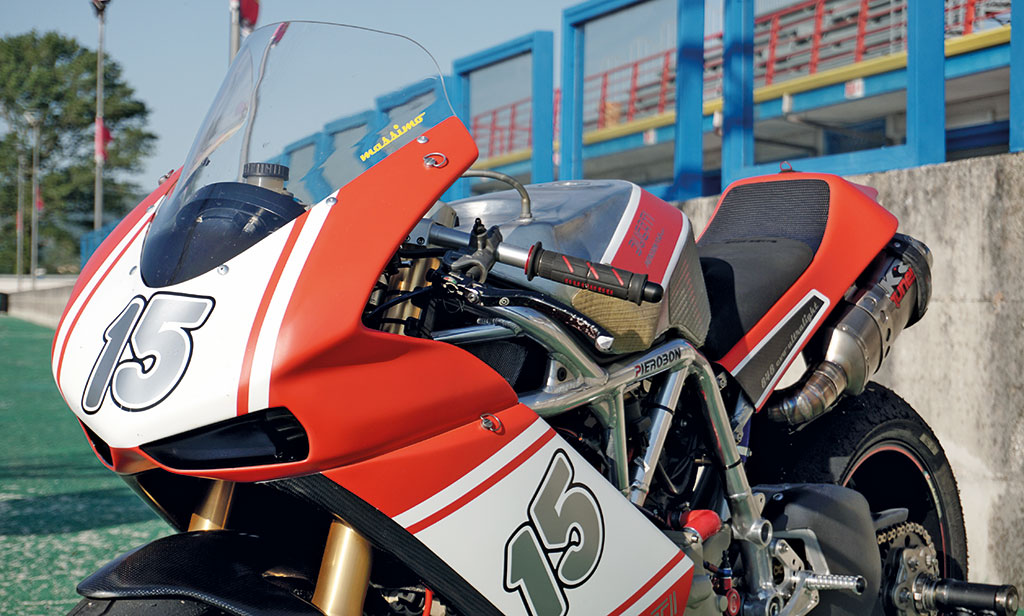 An upgrade with the 848’s four-valve engine that fits perfectly into the Pierobon chassis designed to accommodate a two-valve.

by Massimo Sanfelice. After using for a couple of years with profit and satisfaction my supertwins on a 1100 DS , I gained the conviction that the technical characteristics of the engine, although quite "pumped", went a little tight, also considering the reliability problems and maintenance needs that such an engine normally requires. I had already taken that insane desire…

After using for a couple of years with profit and satisfaction my supertwins on a
1100 DS
, I gained the conviction that the technical characteristics of the engine, although quite “pumped”, went a little tight, also considering the reliability problems and maintenance needs that such an engine normally requires.

I had already taken that insane desire to optimize what has been thought and studied and that puts me, from time to time, to question my skills, for the sake of creating something unique that can be guided and fine-made: I am done like this!

Taking advantage of this cycling base I developed an important upgrade, to replace the 1100 DS air engine with a four-valve engine.

The pretext was a piston detonated in Vallelunga, during a twin-cylinder race, so I found myself with everything disassembled. I had already purchased a peeked 848 engine and then started doing compatibility tests.

In Pierobon, in the early 2000s, when they made this chassis /artwork to make the 900 SS racing, they could not know that they had made it compatible with the Testastretta 848 that was yet to be born! I must point out that defining this transplant as high tailoring is to say the least, but I do not have so many merits, I just had the stubbornness to try with the good fortune to see the vertical head exhaust pulley turn just 2 millimeters from the frame!

Of course, some compromises must be accepted; in fact it is not possible to replace the vertical strap without turning the engine down about ten degrees, but without removing it from the frame. Phase and voltage control is possible without major problems.

At the end of November 2019, after the last annual runway, I therefore decided that the time had come for this substantial change, to be then ready for the next spring.

My design choices, after many technical evaluations, then went in the direction of
the 848 Evo
with dedicated exhaust of the Termignoni track and single-arm swingarm, the only solution that would have allowed me to use a discharge already born for the Sbk motorcycle without major modifications and tribulations.

For the installation of the engine I had to work in a disused way to lower the seat of the swingarm in order to restore the chain shooting value of the 848 carter.

This delicate operation took my sleep away for several days; when I started milling to remove the attachment point my hands were shaking: I was milling, with a vulgar cup cutter, a piece built from the filling with a 5-axis machine!

When then, after the accurate welding carried out by the wise hand of my friend Pietro Fucile, I put everything back in dima, with relief and satisfaction I found everything perfectly aligned.

My recurring nightmare was how to explain to Massimo Pierobon why I had desecrated one of his works of art, and the “Go to shit” in perfect Emilian/Romagna style that I would have caught if I asked him to restore it!

Behind all this design, realization, try, there was the constant presence, even if at a distance, of a true enthusiast of these projects, the friend Carlo Benatti of Byte Therapy, author of several racing supertwins realizations, who addressed several of my technical choices. I still hear him say that: “Where there is an 848 there can be a 1098 and also a 1198“.

In fact yes, but having as its main objective to carry out my first 60 years without putting on the “motorcycle for hat”, I was convinced that about 125 Hp at the wheel was enough not to have to engage a rodeo with the bike at every turn exit, moreover in the absence of electronic controls, in my deep conviction!

After finally installing the engine, the work focused on swingarm 1098 to make it cantilever, thus positioning the shock absorber with the same factory dimensions, without altering its inclination, but playing only with the reduction of the interasse, changing the length of the body without altering the run, always assisted by his friend Pietro, reference Ă–hlins in Salerno.

While I was there, I also modified the swingarm to make it compatible to accommodate the Pirellone 190/60 slick. 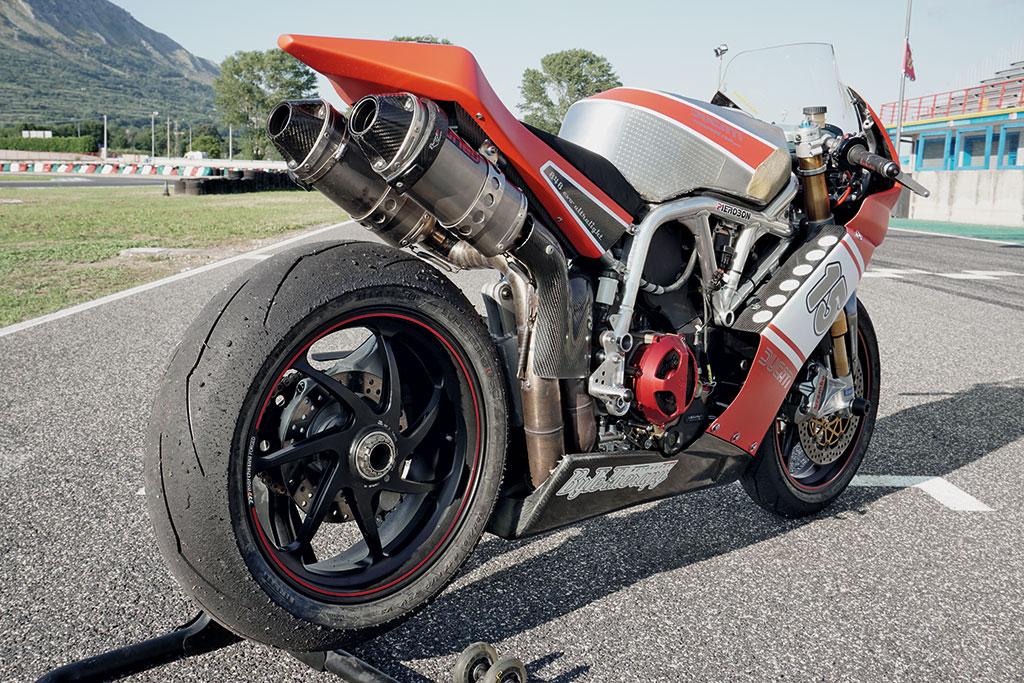 After checking the perfect alignment of the bike again, again in the bubble, I switched to mounting the exhaust, building the V terminal for the installation of a pair of very light titanium/carbon KR silencers.

Here I tried an absolutely new construction for me, the “salami slices”. With a 3D simulation I established what was the ideal development and therefore the angle with which to cut the pipe to be jointed, expertly welded always by the usual Peter.

Could anyone think Peter has time to waste? In fact almost yes, we were in full lockdown and so I could get all the attention that such a project deserved!

With the health emergency I too had the opportunity to work hard, about 14 hours a day, in the garage for two months, unfortunately with few breaks for work, the real one.

I have to say a very bad period with many, too many worries about a VAT number like me, which the mental and physical commitment of this creation has at times managed to mitigate.

But I return to the project: parallel to the construction of the bike I started the overhaul of the engine, an 848 Evo with a few kilometers purchased by Gianluca of BRT Roma, another “supervisor”.

The engine was semi-new and intact and in order not to alter its reliability and durability I would simply have to provide thermal control and accurate goniometric disc ing.

This was the idea, but in the end, taken from an irrepressible nostalgia, I proceeded to mount the gearbox and the primary of a 1198 to install the dry clutch STM Sbk Evolution borrowed from the air engine; I admit, I could never drive a Ducati that does not “tinkling”.

I then installed a series of ergal-able pulleys and the entire bolt has been replaced with the titanium equivalent; while there was this operation I did it for the whole bike, engine part, swingarm and front axle included.

The airbox deserves a separate speech, completely redone compared to the two valves; of the old man, already self-built at the time, I rebuilt the support plan for the new butterfly bodies.

For its realization I used a one off technique using a special two-component silicone for molds with which I solved the problem of undercuts: with this system I layered it quickly, avoiding having to build a complex decomposable mold.

The rain injectors were mounted on an anticorodal tube support and inside the airbox I inserted, on Carlo’s advice, the pressure regulator for which the “tube gyrus” of the injection is inside the case, with specially made passaparete that connect In and Out to the tank that connects it as a lid, with the petrol pump immersed.

In parallel with the assembly in my laboratory, Carlo worked in his workshop in Giaveno to simplify the electrical system of a 1198 and the configuration of the control unit, a Microtec with controller and double lambda.

Seeing the end of the work approaching, I thought that I would be left alone to dress the bike with the old bodywork, but, much to my disappointment, I had to note that the fairings made for the two valves had become a little narrow, as if the Period of Covid had also made the bike gain weight in addition to the rider!

The presence of the radiator derived from a 999, the ledge of the water pump and the electrical system housed in front of it as controlled by the system derived from 1198, made it impossible to use the bellies already conceived.

Taking advantage of the time available I decided to use the old bodywork as a model from which to derive the new; wood, polyurethane, glues, stuccoes, elbow oil and dust indigestion; after a month’s work the models were completed.

I had to widen the bellies by a few centimeters and also adjust the volume of the tank to the new Termignoni exhaust, much bulky than that of the old engine.

I also created the models for the support of the electrical system and the heat protection of the new exhaust.

With patience, and occasional loss of patience, I made all the molds and then got all the carbon fiber components. On balance it was a necessary job, because, since the old VTR bodywork was built in a single model, an unfortunate fall would unfortunately have made it impossible to replicate it.

With this new carbon fiber, I filed approximately 5 kg, on average 1 kg for each piece of it.

After the complete assembly of the new born, came the long-awaited day of weighing, which for a dad is an important moment: 79 kg at the front (51%), 76 kg at the rear (49%), 155 total with liquids without gasoline.

The vacural alloy engine casings, the total use of carbon fiber, the diffused titanium one and, finally, the splendid Marchesini Genesi rims in forged aluminum, helped to keep the weight below my expectations, only a couple of kg more than the pumped two valves, where only crankulation there were several kg of “slimming”.

With a titanium drain I would remove some other chiletto, but at what price?!

For the realization of the saddle I used the expertise of Raceseats of Milan, to which I provided the carbon bottom on which they profiled a real racer seat, in gel covered with neoprene, so effective that after the first exit I had to use borotalco to be able to slide sideways, much to the hilarity of my friends who, when I dusted the saddle , they suggested squat sessions! I admit, on the track age is not an accomplice of rider both for power and muscle reactivity, but adrenaline and feeling young partly compensate for these shortcomings!

And came the track; there were several outputs That I made for the development of this updated bike, to calibrate the electronics of the completely new engine, with the constant support of Carlo via TeamViewer, also looking for completely different ratios with respect to the two valves, causes the different arc of use; now, in fact, the engine pushes decisively above 7000 rpm, below which it is a bit weak for its intrinsic design characteristics.

The cyclist responded by giving me the same sensations of feeling and safety that I had got to enjoy with the old engine: successful transplant! During a couple of pistachios in Vallelunga, still having the two valves circulating in my blood, I struggled to understand that this engine begins to turn where the other stopped!

Reading telemetry, my friend Carlo repeatedly urged me to anticipate the opening of the gas, but for me they were completely new conditions, as acting in this way the two valves I would certainly put it by the hat!

So I just have to reset the driving style and anticipate the gas openings, on the other hand in this case the saying ” If you areuncertain keep open” fits perfectly!

Well, perhaps in hindsight 1098 suggested by Carlo there would not have been any bad, and who knows if in Pierobon they had already thought even about this development!

Maybe, if I were to take this step, with a touch of pride I could in the future tell them that chassis no. 0033 with that pair at stake did not crumple, nor did I! 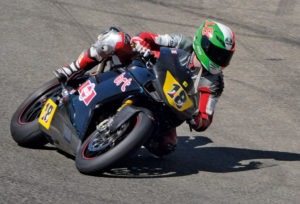