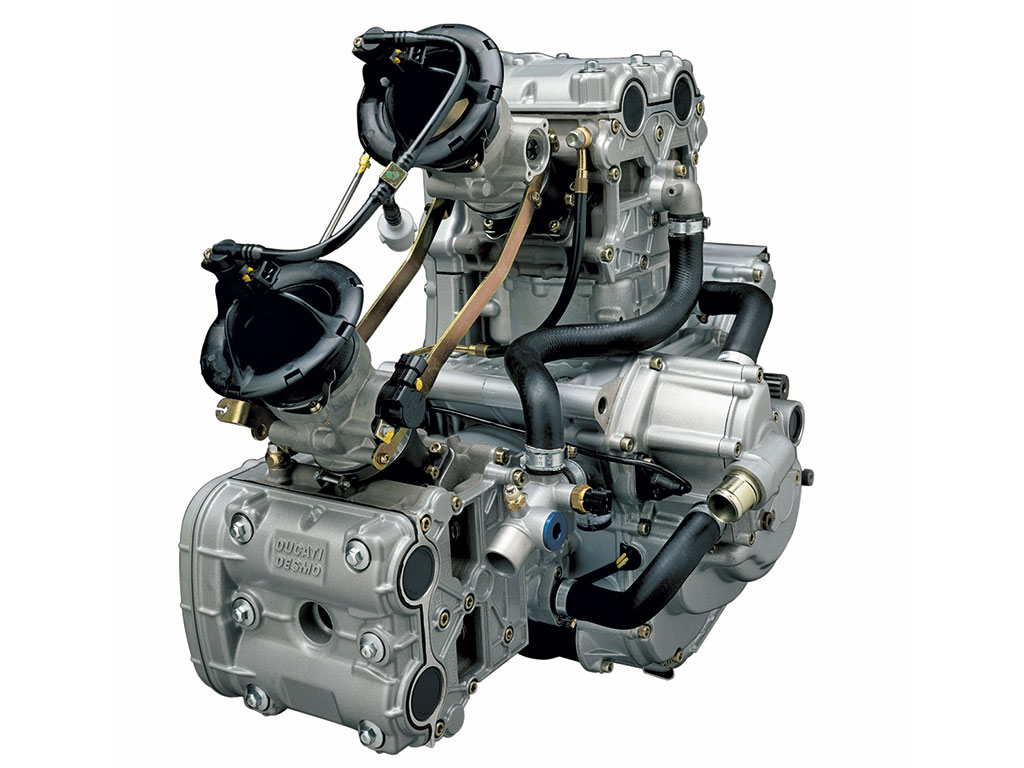 In this 2001 text, Ing. Filippo Preziosi (technical director of Ducati Corse at the time) illustrated the main characteristics of the new engine.

The design of the new Testastretta engine was born in Ducati with the stated aim of maintaining the competitiveness that the 996 desmoquattro engine demonstrated both on the road and on the track with the victory in 2000 of the 9000 WSBK constructors' world title. The mission to replace that jewel of effectiveness and design rationality that is 996 desmoquattro,…

The design of the new Testastretta engine was born in Ducati with the stated aim of maintaining the competitiveness that the 996 desmoquattro engine demonstrated both on the road and on the track with the victory in 2000 of the 9000 WSBK constructors’ world title.

The mission to replace that jewel of effectiveness and design rationality that is 996 desmoquattro, born from the insights and matites of Bordi and Mengoli, was at the same time an arduous task and at the same time a stimulating challenge. To succeed in this, all the resources available in Ducati have been mobilized, both in design and in calculation and experimentation […].

When designing a racing engine, it is not allowed to adopt any technical solution that is not suitable for maximum performance. For this reason, the specific characteristics of the 996 were critically analyzed to see if it was convenient to keep them in the new engine.

The result of our analysis was the confirmation of the characteristic points of the “old” desmoquattro, not only for the love of tradition and Ducati image, but also and above all because these characteristics are tremendously effective. Twin-cylinder engine, L-layout, desmodromic distribution were, therefore, the cornerstones from which the design started.

The power of a 4-stroke aspirated engine, with the same displacement, is closely related to the piston area therefore, in order to obtain a new base on which to work successfully to obtain ever higher performance, it was first necessary to increase the diameter of the pistons from 98 to 100 mm. This seemingly minimal change, however, resulted in the complete redesign of the entire engine. Let’s see how and why.

First of all, increasing the bore, and consequently reducing the stroke from 66 to 63.5 mm, leads to new and greater difficulties in achieving the high compression ratio values that are required in competitions to obtain good thermodynamic yields.

In the desmoquattro engine, the angle between the valves of 40Â° determines a not optimal chamber shape for the achievement of high values of the compression ratio when moving towards very super-square motors and that is with a very pushed bore/stroke ratio. In fact, as the stroke decreases, it is increasingly difficult to achieve the required compression ratio unless you make pistons with a very tormented roof resulting in a worsening of the indicated yield.

The adoption of an angle between the valves similar to that used in the current F1 engines certainly allows to design a combustion chamber with a regular shape, together with the possibility of achieving higher compression ratios with large bores more easily. For this reason, a particularly low included angle (12+13 degrees) has been adopted since the first study.

The great design problem that immediately axed was the impossibility of combining the desmodromic distribution with such a small angle between the valves. In fact, by reducing the valve angle, the intake and exhaust balances tend to approach, preventing their physical positioning in the head, unless they make a very high head, incompatible with the needs of placing the engine in the bike.

Already in the engine desmoquattro Mengoli had made up all the space available between the barbells to obtain a relatively small valve angle (40 degrees), more could not be done. In the fight against millimeters, however, three elements came to the rescue that made it possible to obtain the desired result: the entire upper valves, the adoption of the notto reported in steel, the new geometry of desmo.

The first element derives from the fact that the desmoquattro engine was born for a bore of 88 mm, which provided for a valve center distance of 41 mm in intake and 38 in exhaust. The new Testastretta, on the other hand, having been designed for a bore of 100 mm, boasts a valves of 45.3 mm in suction and 41.5 in exhaust […].

The second element makes it possible to produce very short balances part of the flow rates, in order to facilitate the arrangement of the balaces themselves. The third element was certainly the most effective choice. In practice, a new position of the barbells has been designed, which provides for the opening barbell on the opposite side of the closing one with respect to the valve axis. This choice freed the space in the center of the V of the valves from the need to arrange the doors of the opening balances, which made it easier to accommodate the closing ones.

Once the geometry of the desmo had to be overturned, a series of simulations and experimental tests had to be carried out to validate the functioning of the desmo, particularly in the racing application.

In fact, in order to deliver the theoretically expected surplus of power, the engine with higher bore and lower stroke must rotate at a proportionally higher rotational speed.

The whole mechanism is then more pressed for three reasons: the valves have a higher diameter and therefore a higher mass, in order to obtain high efflux coefficient values it is necessary that the valves with a larger diameter have a proportionally higher riser, the rotational regime is higher. For the above, it is clear that the mechanism is much more requested (mass, riser and regime have increased), so it requires much more careful design and implementation.

Another element which is more urgent, for the same reasons, is the distribution belt. Here, too, the experience gained over the years has been put to good use, so that belts produced with state-of-the-art technology have been adopted, already successfully tested in another highly sought-after engine: the 748 R.

[…] The engine crankcase is another detail that has benefited from the experience accumulated in participation in the Superbike World Championship. In fact, the tests carried out on the track and the reliability tests have shown that in order to allow a good extraction of oil to the lubrication pump during the frightening accelerations and decelerations to which a motorcycle is subjected in the race, it is necessary to refine the design of the carter[…].

The feeding system also benefits from the adoption of the injector above the butterfly already tested in the race on the official SBK bikes and introduced in production with the 748 R. The system has only one injector positioned upstream of the butterfly adjustment valve. In this way, gasoline has more time to mix with air before entering the combustion chamber, which allows better mixing with obvious combustion advantages.

In addition, the higher rate of gasoline that vaporizes compared to traditional systems with injector under the butterfly cools the air-gasoline mixture more, resulting in increased density. In this way there is a kind of thermal supercharger, similar to that achieved in turbo motors by intercooler. 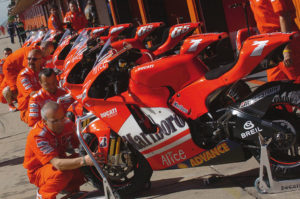