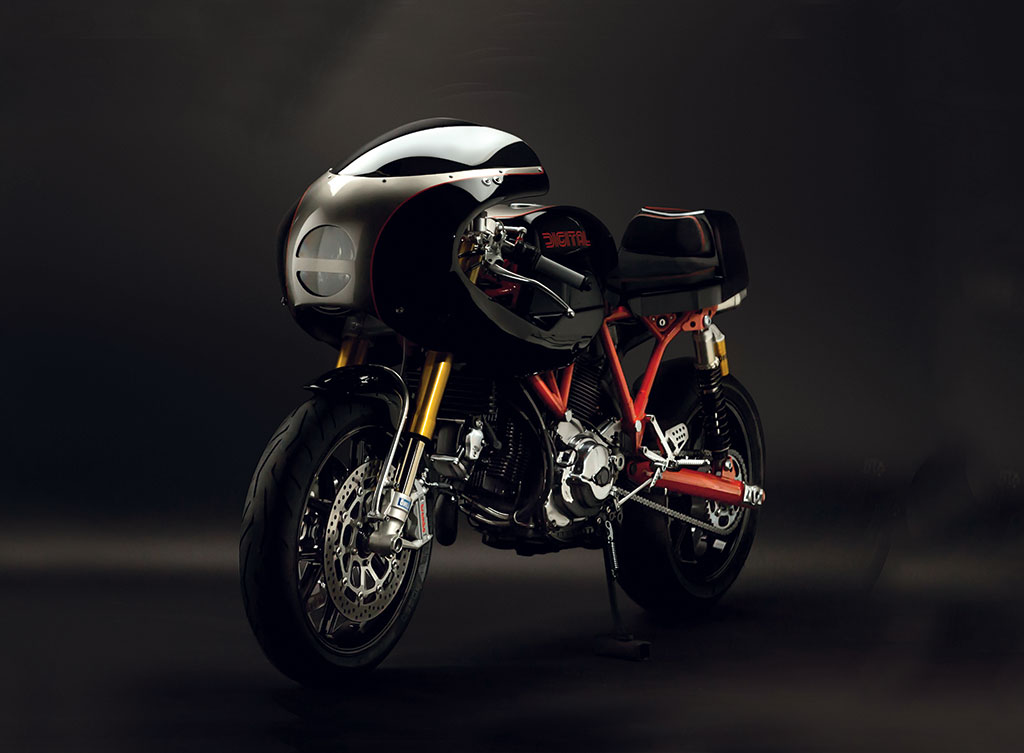 The “Bella” is a special that combines creativity with respect for ducati style. The base is a Sport 1000, the inspiration comes from the MH900e.

Joe Tessitore is the owner and main protagonist of Digital Directiv,an interesting reality of the motorcycle scene based in Portland (Oregon), in the United States of America: Digital Directiv is in fact specialized in making vintage motorcycles in step with the times thanks to modern components and technologies. Joe has honed his skills in years of experience and his philosophy…

Joe Tessitore is the owner and main protagonist of Digital Directiv,an interesting reality of the motorcycle scene based in Portland (Oregon), in the United States of America: Digital Directiv is in fact specialized in making vintage motorcycles in step with the times thanks to modern components and technologies.

Joe has honed his skills in years of experience and his philosophy is very simple: “Vintage motorcycles, by their nature, require a lot of maintenance and mechanical knowledge. My goal is to make it even easier for ordinary people to use these pieces of history“.

Digital Directiv’s bikes feature clean lines, fine finishes and great attention to detail, but Joe’s real trademark consists of the technical part and especially what concerns electronics:“There are some specialized companies that turn to me to solve their problems with the electrical system. For me, now, it is a habitual practice“. 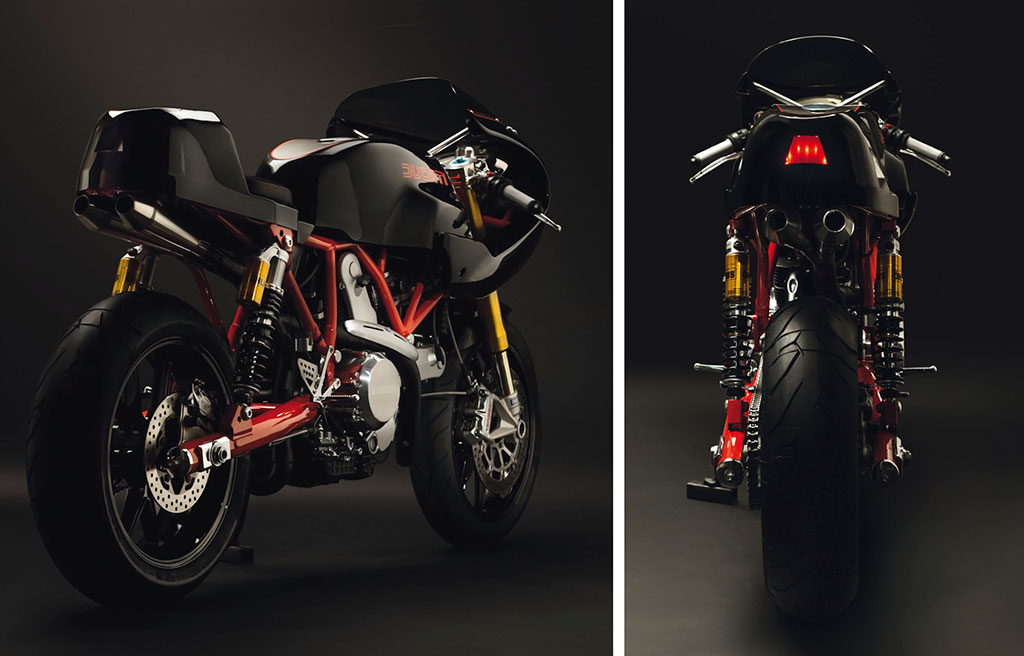 Speaking of notable specimens, Joe recently devoted his attentions to a model of the more precisely to a 2007 Sport 1000 S, giving life to what he himself renamed ” “: the bike in question was born because Tessitore is a big fan of the designer who once was head of the Ducati Style Center. ” Most fans â€“ explains Joe â€“ he knows the models of the Sport Classic family quite well, but maybe they do not know that these bikes draw inspiration from a model that for Terblanche was one of the first projects made within the Ducati: the beautiful MH900e dedicated to the great Mike Hailwood. This bike has been made in limited edition and assembled practically by hand. It is characterized by numerous exclusive details that were not present on the other bikes included in the price list of the House of Borgo Panigale. In practice, it was the ideal model to give life to the Bella project. With it, I could have imagined what The Classic Sports could have been like if they had been produced with today’s technology and solutions, regardless of expense. I wanted to combine the attention to detail reserved for MH900e with the technological level of ducati’s top-of-the-range products. For this reason, almost every detail of the bike has been taken, in addition to the MH900e itself, by other Ducati of modern production; Moreover, I wanted the bike to look elegant and refined. Marchesini rims and steering plates are those of a 999 R, the electric switches on the handlebars come from a Hypermotard, the Ă–hlins fork and the Brembo braking system belonged to a 1098 S. Ă–hlins shock absorbers, on the other hand, are those specific to the Sport 1000 S“.

Many customizers pride themselves on doing everything themselves , perhaps atthe expense of the final result. Joe does not belong to this category:for him everything must be perfect and, if he needs advice or collaboration, he does not hesitate to turn to those who are more experienced than him; that’s why he recruited in the industry to bring the Bella project to life.

Chris from Masic Industries,for example, took care of finishing every nut and bolt on the bike, as well as polishing some aluminum elements, including engine semicarters, and painting the frame and rims, after careful brushing of all welds.

Jeff Johnson, of Illegal Designs, gave life to the exclusive aluminum codon, made in one piece and mounted using the planned bindings as standard in order to make its removal easier; Jeff also made the beautiful double terminal exhaust under the saddle starting from the implant of a while the suede saddle was created by hand of the the black and gray livery with red finishes, on the other hand, is the work

Of course, the characteristic touch that Weaver reserves for every creature of the Digital Directiv could not be missing, therefore all the light devices are made of LEDs,including direction indicators and stop light, with this one ing the characteristic of being almost invisible when it is turned off.

The start-up, then, does not take place through the classic ignition in fact, it is enough and, when approaching, it is enough to press the start button; similarly, when you move beyond a certain distance, the bike returns to stand-by mode and it is no longer possible to turn it on. 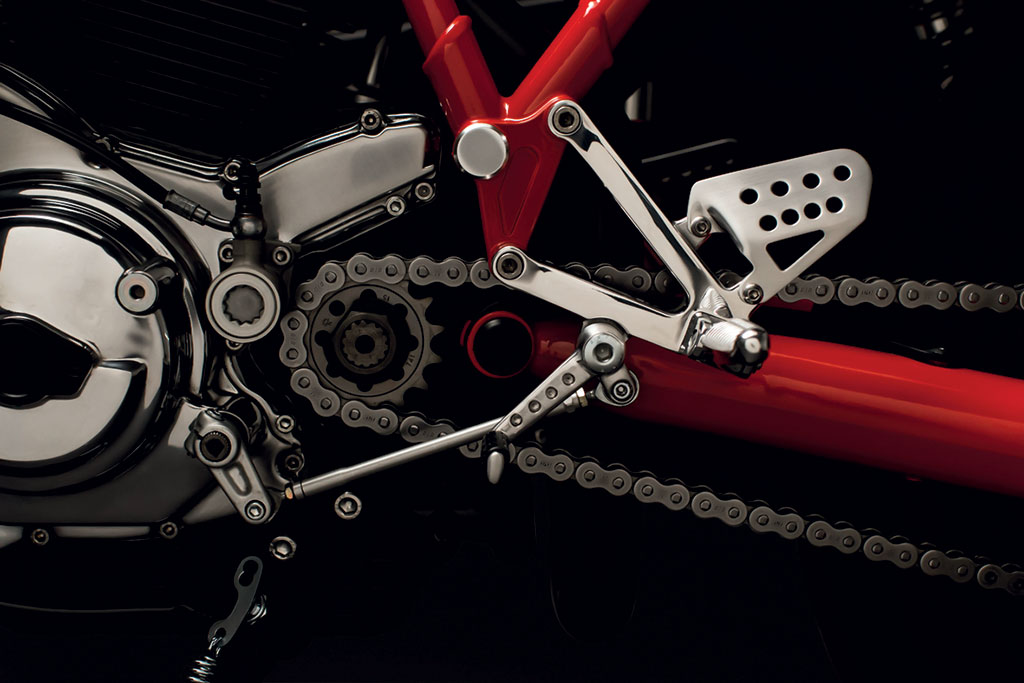 Finally, Joe wanted to experience something never experienced before, interfaithing the electric system of the Sport Classic with the digital dashboard of a 1098! Those who understand electronics know that this is a highly complex operation, because the level of compatibility between the two models is zero.

For this reason, in addition to weaver’s expertise, it took more than 100 hours of labor to complete the work and literally agree on the various elements, control unit of the ignition and injection system included; of course, it would have been easier and faster to mount an aftermarket instrumentation, !

His creature, in fact, represents a beautiful example of ” functional art “, as he calls it, whichskilfullystraddles two distinct realities: that of the custom world, which has always been synonymous with creativity, and that factory, faithful to the canons of the brand imprinted on the tank. 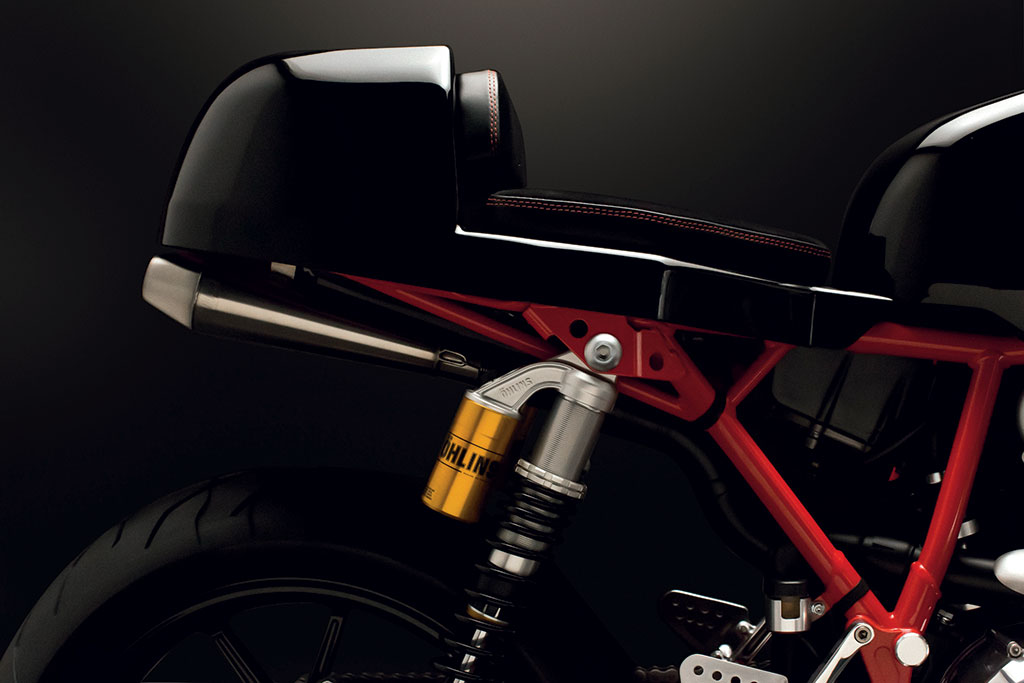 The Bella, therefore, takes the best from both, revealing itself as a unique bike both to be seen and to ride, tailor-made by those who have a passion really out of the ordinary. 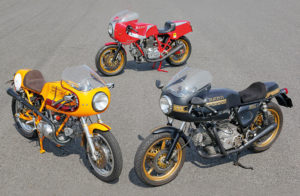 3 specials on ducati carter quadri base

Period charm and driving fun: the idea of the Tio is to find a compromise between the original models and modern technology.