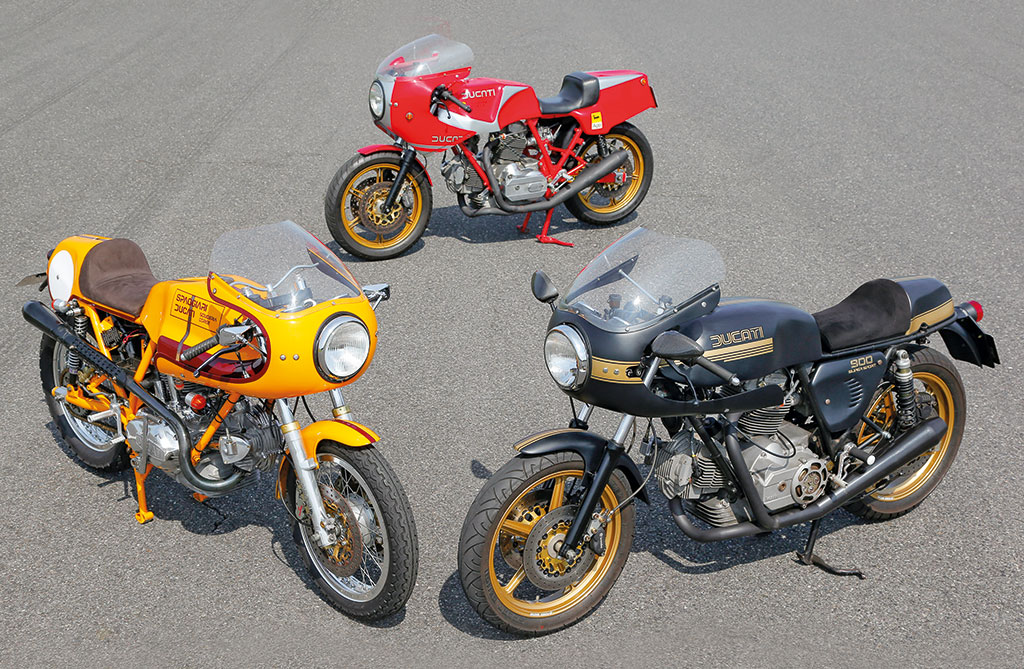 Period charm and driving fun: the idea of the Tio is to find a compromise between the original models and modern technology.

The topic is of delicate ones and certainly touches ropes very much felt by enthusiasts: can you intervene on historical Ducati models, even rare and precious, to make them suitable and suitable for use on the road? Of course, for us Italians the problem does not arise, because we are used, apart from a few rare exceptions, to leave these…

The topic is of delicate ones and certainly touches ropes very much felt by enthusiasts: can you intervene on historical Ducati models, even rare and precious, to make them suitable and suitable for use on the road?

Of course, for us Italians the problem does not arise, because we are used, apart from a few rare exceptions, to leave these bikes stationary in garages or, at the limit, to use them very sporadically for some event, such as period meetings and similar situations.

But abroad this is not the case, motorcycles are used and are indeed the pride of their respective owners who love to show them off on their tours: who is right?

We leave the answer to others, as here we must take note of the solutions developed by a Japanese company, Tio,very active in making the old Ducati conical pairs with framework crankcases more reliable, safe and comfortable.

This is to meet the needs of their customers, owners of these bikes and eager to use them often, but without any desire to stay on foot; it is therefore necessary to overcome the chronic problems of these means which, in some cases due to initial deficiency, but also because of the problems that the passing years entail, are not exactly reliable (think only of the problems that caused the electrical systems of the time).

Then, there is also the question of the physical body, notoriously not very high of the Japanese people, and therefore a little in difficulty on motorcycles with radical measures such as those of the good and dear Ducati of the time.

At Tio, therefore, they set to work and produced for their customers three different solutions that differ in the quality and quantity of the changes made: variations on the subject that, however, we must say, do not seem irreversible to us and therefore it should be reasonably simple to return to the original configuration.

In short, solutions that could also be for us; it is easy, in fact, that many of us, at least once in our lives, dreamed of owning a conical couple, but then gave up this desire because of their complex maintenance, but also because of the difficulty of finding the relative spare parts.

It so happens that, always to remain in the historical field, the attention is turned to models with belt distribution, which have minor needs such as maintenance and are also much less expensive at the time of purchase: there are therefore a number of reasons that result in the renunciation of the dream.

The idea of Tio, in this sense, is to find the right compromise between the original model and modern technology, in order to make driving more fun, without compromising the appearance and charm of the old conical couples.

The first bike, the one that has been most consistently modified, is this “Spaggiari Replica”, born starting from an MHR 900. This is a clear tribute to the Ducati 750 SS used by the team curated by Bruno Spaggiari

and brought to the track by drivers of the caliber of Franco Uncini.

The engine has been completely disassembled and developed, employing lighter pistons than Pistal Racing, camshafts of the Australian VeeTwo and choosing the famous Keihin FCR 41 mm as carburetors.

Then the entire electrical system was redone ex-novo, while all the superstructures (tail and tank, equipped with the classic transparent “signalling” band of the fuel present) are made of light fiberglass.

All new brake and suspension departments, the first with the use of Brembo Racing discs and pliers (complete with radial pump!), the second with revised fork and Hagon shock absorbers.

But we hear the opinion of the journalist who had the pleasure of testing this bike for a long time: ” Personally I was lucky enoughto ride several Ducati conical pairs, but the engine of this Replica Spaggiari gave me an entirely new feeling.

The ignition of the engine takes place through the pedal start, the bike starts immediately, as in the previous Tio models that I had already tried. I am struck by the reaction of the engine, which responds to the slightest movement of the wrist: I had never had such an engine that was so responsive. I knew that using FCR carburetors you have a more immediate engine response, but this readiness does not come only from this technical choice.

The crankcase is made by Tio and is perfectly integrated with the motorcycle line, as well as having the advantage of resuming the shapes of the round carters, certainly visually more pleasant than the square ones! The position in the saddle is a bit elongated, not collected as in today’s supersports. It is therefore necessary to tilt the body forward, stretching out the arms well to get to the handlebars: it is not easy to find a comfortable position because of the tank so long; in short, you immediately understand that you are driving a Ducati of the seventies. Once you find the right position in the saddle, however, driving is very natural and it is a pleasure to easily perceive the reactions of the bike. The secret for effective driving is to enter the corner quickly, without sudden movements, and then exit it acting progressively on the gas control, with a certain sweetness.

The engine, although obviously less powerful than the current twin-cylinders, gives the feeling of a very performing torque, with the laps going up with ease, up to the high speeds. I dare say that the feeling that transmits this engine is similar to the feeling of the modern two-valve engine: in fact, thanks to its generous torque, it is soon forgotten that you are driving a vintage motorcycle.

Pushing the engine high does not feel any uncertainty, even after heavy use. Remember that to obtain the best performance from this type of engines, the perfect registration of the conical pairs of the distribution is fundamental, certainly not a simple operation and that requires a good experience in this regard.

It is true that to achieve such a result it takes time, passion and money, but the owner of this bike now has a safe and reliable vehicle, as it could not have been otherwise. These square carters deserve great consideration being vintage models, but to give it up just for fear of having a mechanical problem, it would really be a shame!“.

That is true; then we must say that the bike in this configuration really has all the cards in order not to go unnoticed!

Certainly more contained are the interventions carried out on this bike, where in reality the owner had no intention of making any changes, other than a simple development; but you know how things are going when he addresses us to experts, easy to change his mind!

The fact remains that, in this case, the goal of the intervention was to maintain the original style of the bike, but improving comfort and driveability, without upsetting the engine, apart from the installation of an original dry
clutch of
the Kanrin.

The shape of the tank remains that of the original, it is just less long, but in reality it is now made of aluminum, therefore very light, while the fairing is wider than the original.

At first glance it seems that everything is original of the time, but using parts made with different materials, the bike has become lighter, as is evident from the replacement of the rims and fork with those produced by Bito R&D which, according to Kawase, owner of Tio: “… among the circles on the market, those of R&D are the best for the series conical pairs”.

All this, of course, is in favour of the handling of the vehicle, which benefits, at the rear, from the presence of a pair of Ă–hlins shock absorbers.

For this third and final elaboration we started from a Mike Hailwood Replica of 1982, a motorcycle that had already been modified by the famous company “Power House”, Japanese pioneers in the elaboration of Ducati. In this case, the bike is owned by Tio itself and has the peculiarity of having only one owner! Also for this model, of course, the engine has been overhauled, but no mechanical modification has been made, while the electrical system has been revised and modified to achieve a certain reliability.

Originally this special had the NCR exhaust system in configuration 2-1, but not having sufficient torque at low speeds, as it was designed for competitions, it was preferred to replace it with one made by Tio itself.

The fork is the classic Marzocchi with a central grain, the rear shock absorbers are of the Koni, while the braking system is brembo. To improve the driving position, various interventions have been carried out, changing distances and heights between handlebars, saddle and platforms, so much so that it is now easier to drive even for riders of not very high stature. The fairing is from Power House, while the tank and saddle are ncr’s original ones. 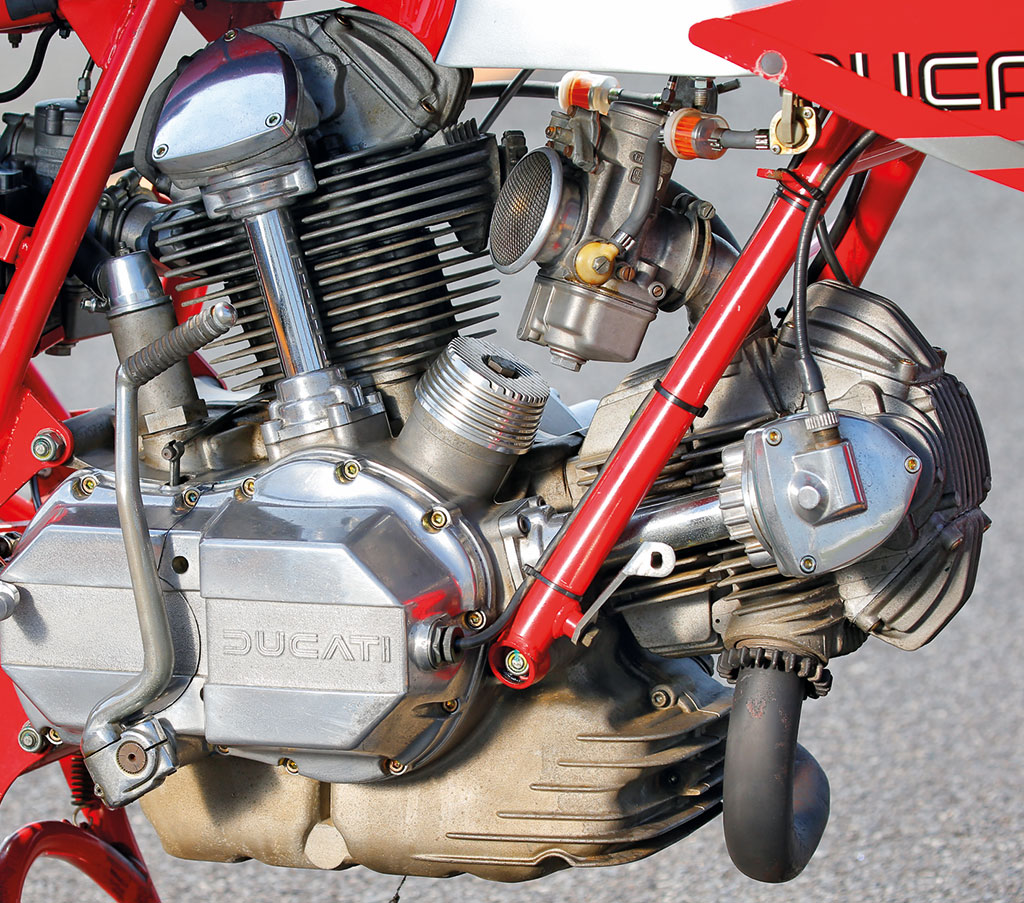 Three variations on the theme, therefore, that all aim to update motorcycles that have made the history of Ducati; As I said at the beginning, if these are reversible changes, it seems to us an interesting way forward. 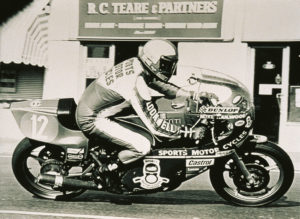