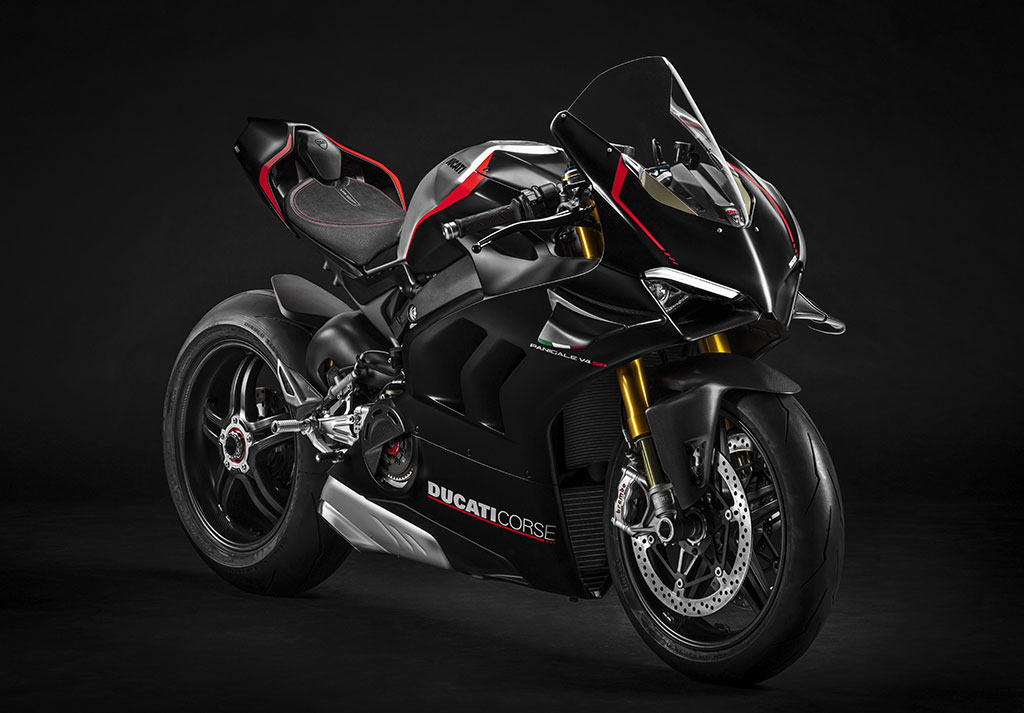 Ducati presents the new 2021 sports cars with SuperSport 950, the new Panigale V4 SP and updates for the Panigale V4.

Borgo Panigale, Bologna, November 18, 2020 â€“ Ducati continues to unveil its news for 2021 with the Ducati World PremiĂ¨re web series. From the world of electric mountain bikes, passing through SuperSport, up to the Panigale V4, Ducati told in the third episode the concepts of sportsmanship and performance that distinguish it. The world of competitions has always been a…

Borgo Panigale, Bologna, November 18, 2020 â€“ Ducati continues to unveil its news for 2021 with the Ducati World PremiĂ¨re web series. From the world of electric mountain bikes, passing through SuperSport, up to the Panigale V4, Ducati told in the third episode the concepts of sportsmanship and performance that distinguish it.

The world of competitions has always been a source of inspiration for Ducati, in fact performance is in the DNA of the company in all forms. The SuperSport 950 is the right bike to bring sports driving into everyday life, without having to compromise, especially in terms of comfort. For 2021 the model has been revised in design, enriched in electronic equipment and equipment, as well as becoming compliant with euro 5 anti-pollution regulations. 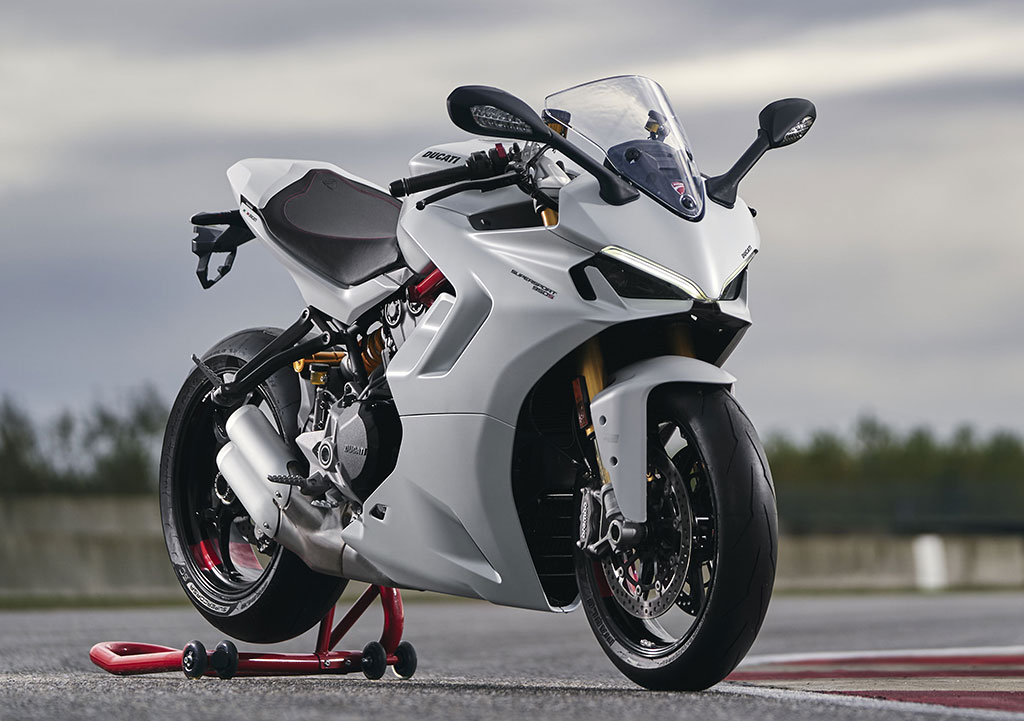 The aesthetic link between SuperSport 950 and Panigale V4 is now even stronger. The front view is defined by the new full-LED projector with the DRL that clearly recalls the sharp light signature of the Panigale V4 and is made thanks to a refined opal that diffuses the light evenly.

The fairings have been redesigned to accentuate the sportiness of the bike and the fluidity of the shapes. The vents of the air coming from the water radiator are inspired by the double extractor of the Panigale V4 models.

The genetic kit of the SuperSport 950 is a true sports car with single-arm swingarm, a braided frame fixed to the engine that acts as a stressed/carrier element to reduce weight and dimensions, ergonomics with raised handlebars for greater control even with the passenger, revised saddle to maximize rider’s comfort through greater longitudinal usability, multi-adjustable suspension, three-spoke “Y” aluminum rims and Pirelli Diablo Rosso 3 tires, radial brake and clutch pumps, which becomes hydraulic, and Brembo high-performance braking system with double disc of 320 mm for a dry weight of 184 kg. 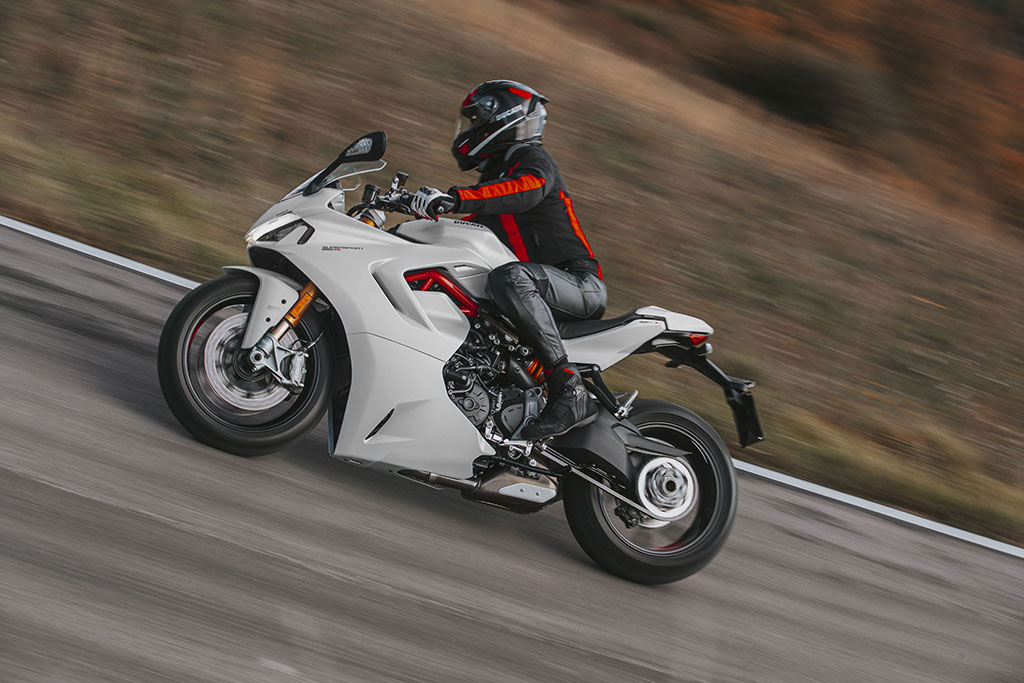 Electronics is one of the areas most affected by the development of the new SuperSport 950, equipped with electronic controls based on information from Bosch’s 6-axis inertial platform, capable of instantly detecting roll angle, yaw and pitching of motion in space. The electronic package consists of ABS Cornering, traction control, soaring control and electronic transmission. The adjustment of electronic settings, as well as Riding Mode (Sport, Touring, Urban) takes place through the menu of the new full-TFT 4.3” color display with graphics and interface inspired by that of the Panigale family. 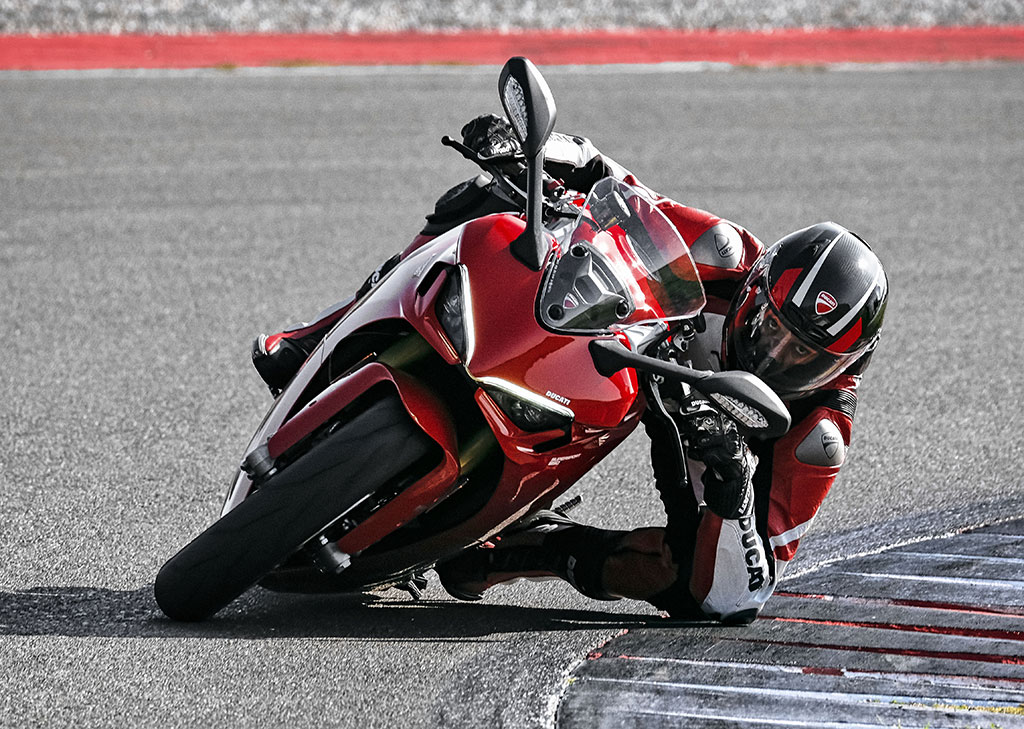 The SuperSport 950 is available in red and, for those who want a more refined bike, there is the S version in the colors “Ducati Red” and “Arctic White Silk”. The SuperSport 950 S is equipped with fully adjustable Ă–hlins suspension and passenger seat covers. Both will be available in Ducati dealers from February 2021. The model is also available in a depowered version.

The
Panigale V4
is the ducati sport par excellence derived directly from MotoGP and, like racing bikes, is constantly innovated and improved from year to year. For 2021, the Panigale V4 and V4 S models comply with euro 5 homologation regulations for countries that require it, while maintaining the maximum weight and power and torque levels. 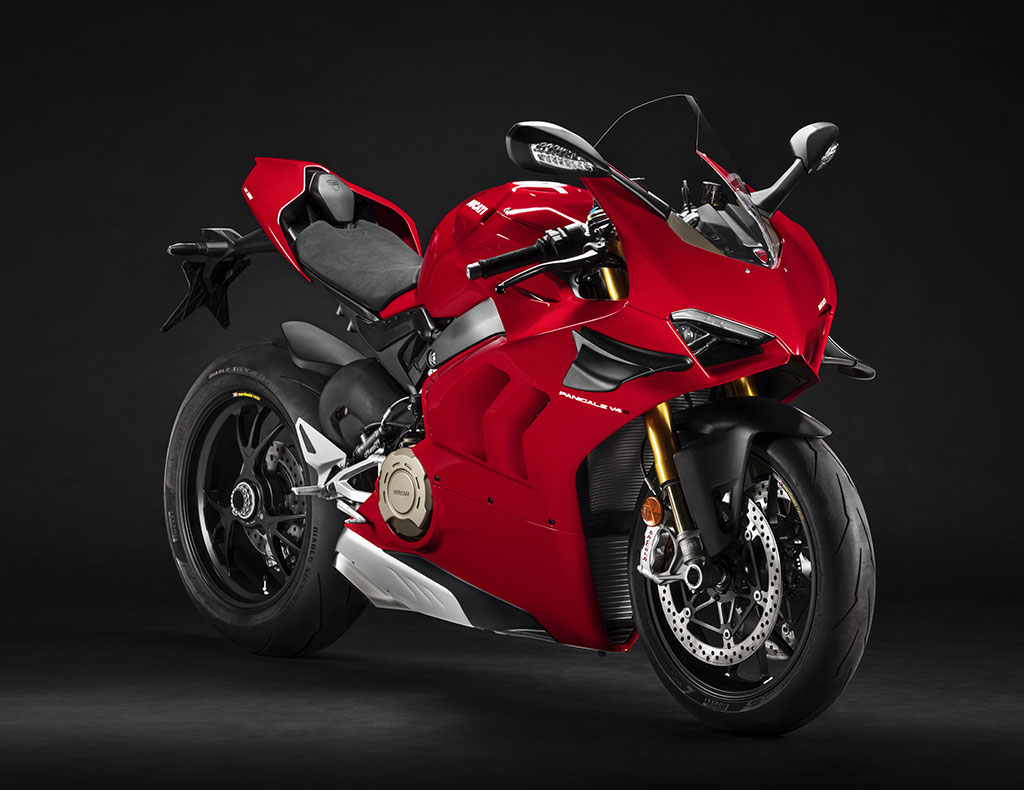 The electronic package that equips the Panigale V4 evolves and now includes the latest generation Ducati Traction Control even more predictive: the DTC EVO 3 with strategy derived from Ducati Corse.

The Riding Mode strategy is also new, specifically the Riding Mode Race has been split into two distinct mappings, allowing the rider to have two different configurations to define the best set-up based on the track and his driving style.

For 2021 Ducati expands the Panigale family by introducing the Panigale V4 SP, which attests to the return of the historic acronym “SP” (Sport Production). The Panigale V4 SP is a numbered version, the number is engraved on the machined steering head.

The Panigale V4 SP â€“ 214 hp, 12.6 kgm of torque and a dry weight of 173 kg â€“ has a dedicated livery and is equipped with all the technical features to enhance its qualities in use on the track. Many elements derive from the Superleggera V4: carbon rims, pliers and brake pumps, dry clutch and same chain size (520). 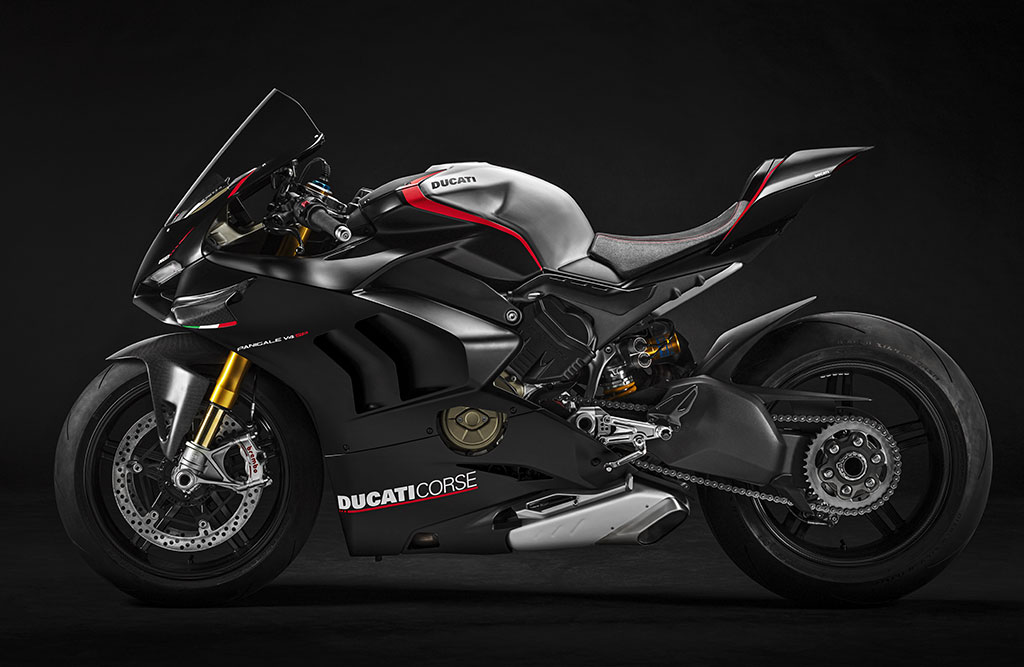 The most important component for improving dynamic qualities are the precious 5-spoke rims split into carbon, 1.4 kg lighter than those forged in aluminum of the Panigale V4 S that reduce rolling inertia, making the bike significantly more agile and light in changes of direction.

Brembo Stylema R Â®’s uniquefront brake calipers ensure high braking power, as well as exceptional performance consistency even during a long timed session without changes to the brake lever stroke. The pliers are operated by a Brembo MCS radial pump, which allows the rapid adjustment of the braking feeling to adapt it to your current needs.

The “SP” Road Desmosedici mounts the dry clutch, which allows to be even more effective on the track in driving at the limit, and is coupled to a final transmission with chain 520, narrower and therefore lighter than the one that equips the Panigale V4 S.

The anodized aluminum Rizoma platforms mounted by the Panigale V4 SP are fully adjustable to adapt to the ergonomics of each driver and maximize the light on the ground for use on the track.
The livery of the Panigale V4 SP is inspired by that used in winter tests by the official MotoGP and Superbike teams, reworked by the Ducati Style Center. The tank is made of open aluminum, the fairings are opaque black enriched with neon red details and carbon components, such as the front fender and wings.

E-MTB, like motorcycles, are able to transmit great emotions derived from the sense of escape, freedom and adrenaline. Ducati, which entered this world in 2019, introduces the new Ducati TK-01RR e-enduro and significant technical updates on the All Mountain Ducati MIG-S.

The Ducati MIG-S is an All Mountain capable of exploring any trail ensuring the rider is excellent rideability. For 2021 it adopts a new Shimano 630Wh battery that guarantees an increase in autonomy of about 26%. The MIG-S has also been revised in frame geometries, with the top tube elongated and the saddle tube verticalized (74.7Â°), thus obtaining greater driving, traction and control comfort in the most technical passages. 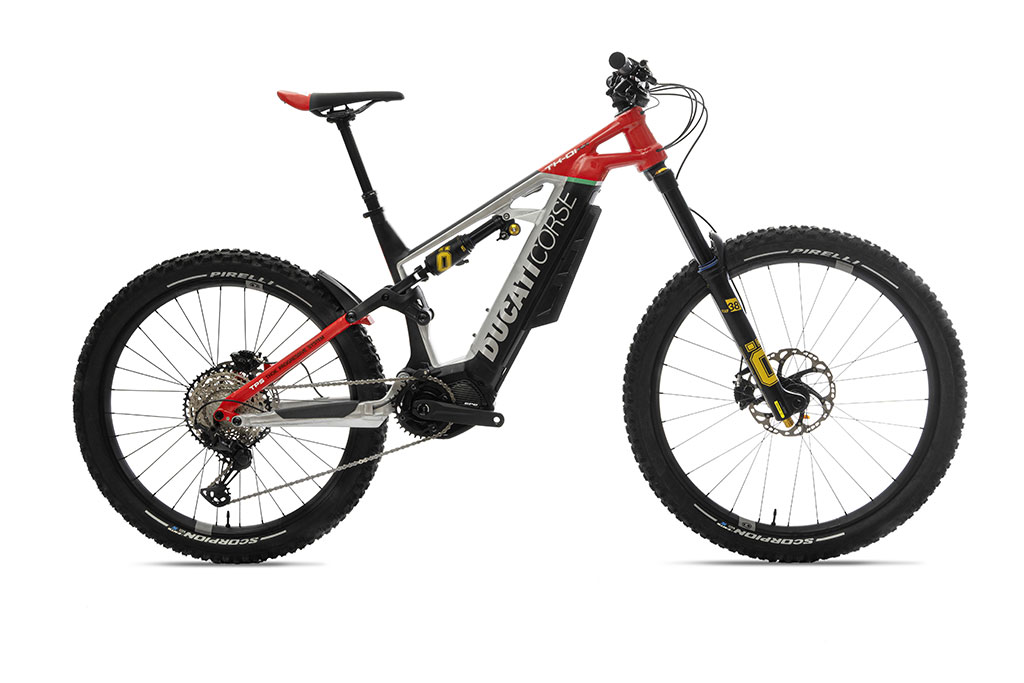 The Ducati TK-01RR is completely new: an e-enduro with shimano 630Wh battery that adopts the most modern technical solutions, with the aim of making every driving phase exciting and making the off-road live in its maximum expression, even on the most impervious routes. The new Shimano EP8 engine is pure performance, weighing 2.6kg making it one of the segment’s lightest and most compact engines and a maximum torque of 85Nm with a maximum servo service ratio of 400%. Combined with the new Shimano E-tube Project App, the EP8 system allows advanced degrees of customization to adapt the engine character to your needs.

Everything in the TK-01RR is geared towards the most advanced e-enduro use, from geometries to high-end components such as shimano XT 12-speed transmission and brakes, the all-new 180 mm Ă–hlins RXF 38 fork and the fully adjustable Ă–hlins TTX rear-travel shock. The TK-01RR is equipped with Pirelli Scorpion S tyres, specifically developed for e-MTB.

The Ducati e-MTB range can already be ordered in Ducati dealers and on Ducati.com. Deliveries to customers will start from February 2021.

Ducati SuperSport S test: on the road and at Mugello