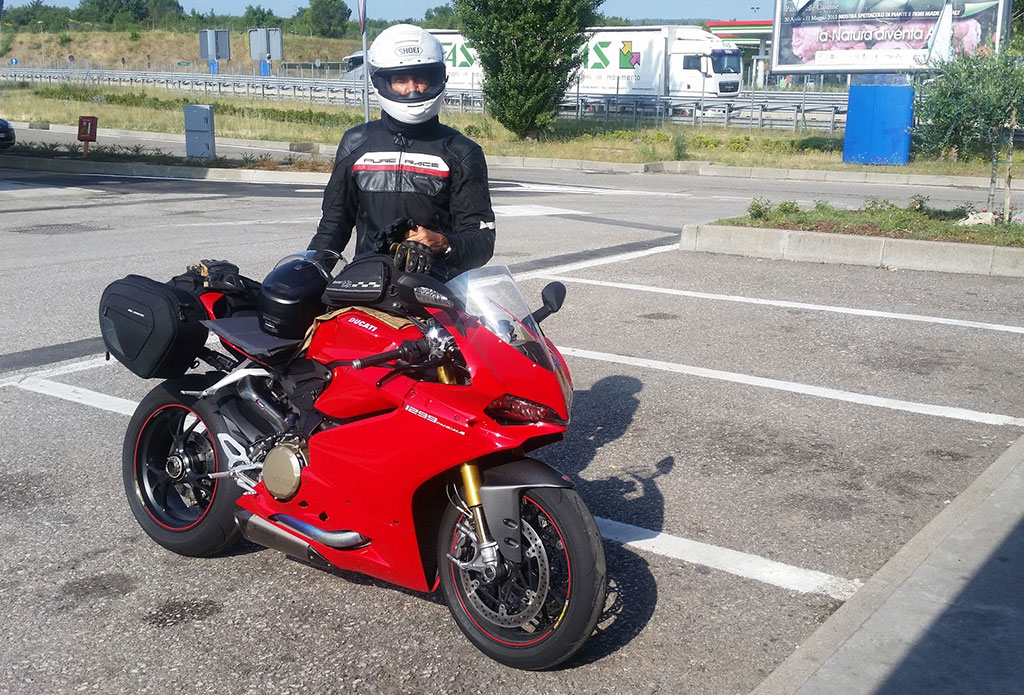 By Alessandro Bianchi. It will be wrong and for many even considered irreverent and inappropriate to experience instincts or feelings towards mechanical means devoid of life and soul. In fact, many will wonder how a cluster of plastics and metals with two wheels can stimulate or arouse desires and impulses that are known to belong […]

By Alessandro Bianchi. It will be wrong and for many even considered irreverent and inappropriate to experience instincts or feelings towards mechanical means devoid of life and soul. In fact, many will wonder how a cluster of plastics and metals with two wheels can stimulate or arouse desires and impulses that are known to belong to the sphere of interpersonal…

It will be wrong and for many even considered irreverent and inappropriate to experience instincts or feelings towards mechanical means devoid of life and soul. In fact, many will wonder how a cluster of plastics and metals with two wheels can stimulate or arouse desires and impulses that are known to belong to the sphere of interpersonal relationships of us humans ??

Well to give an exhaustive answer, justified by valid reasons, it is necessary to start from two assumptions, the first, certainly the most important, that of being overly and pathologically passionate about two wheels, the second, finding the right medium able to stimulate our pineal gland capable of bringing our perception to higher sensory levels, such as to provoke” awakening !” , that swirl of feelings, sensations and desires that normally suit humans.

In my case one of the means that led me to the sublimation of enjoyment was the Ducati Panigale 1299 S. A rare beauty totally out of the classic canons. It struck me the first time to see it so small and compact, equipped with sinuous but at the same time extreme shapes, aimed at expressing strength and power concentrated in its minimal dimensions, with narrow hips to make it darn sexy and a pointed tail never seen before, the 200/55 dinghy that soared large and imposing almost disproportionately for that perfect and petite torpedo.

A wonder for my eyes, to the point of thinking I wanted to take her home even in the evening, tucking her into the elevator by raising the wheel in front, as I did when I was little with the bicycle.

Instead for the stimuli and sensations, I would just like to point out that when you sit in the saddle the rear cylinder of the 1299 is exactly positioned in the middle of our legs (I do not know if Ducati has done it skiily), and once you start, you are immediately shaken by the pulsating of the cylinder, which, given the strategic position, perfectly transmits every piston of the powerful thruster.

The deep vibrations starting from the sacral area go up for the kidneys, the back and they resonate inside the chest making it resonate like a sound box; it would seem with the intention of wanting to involve you in a whole with a medium that lives and asks for your interaction.

I guarantee you that here also sensory perception is at the highest levels, it is not limited to the pleasure of sound and driving alone, but there is also an aspect aimed at the sphere of physicality that is called into question in a predominant way. Obviously I start with the Akrapovic suit, which has contributed greatly to amplifying the real timbre of the engine, as well as the performance, greatly reducing the heat produced, almost to make it livable even in urban contexts in summer. In short, a motorcycle that I would dare to define carnal and passionate precisely for the involvement it manages to generate, literally overwhelming you both in driving and sensations. 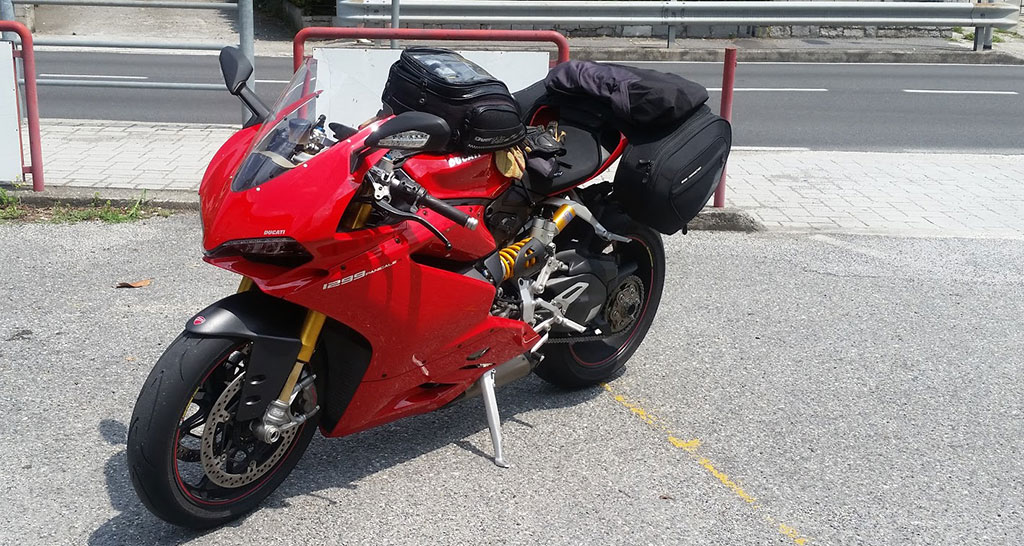 Agilissima, with a pointed and precise cyclist like a razor, is able to generate emotions and adrenaline discharges seamlessly, the engine experienced by me only on the road, is superb, but also very enjoyable at low speeds, allowing you to walk quietly with absolutely low consumption for a means of such performance.

Able to dance flying between the curves, he manages to turn tight even in the most inscapable turns and gently stroking the engine on the thread of the engine torque, devours any path with the lightness of a dragonfly, closing each curve with extreme ease. Simply wonderful, it immediately creates a strong addiction that causes its abuse.

On the other hand, the data speak for themselves: 205 hp and 144 Nm of torque on a short-stroke twin-cylinder weighing 166 kg are his business card. But for those who believe that its habitat is only the track is very wrong, in fact, contrary to what it would seem, the seat in the saddle is comfortable, the bust is not too loaded forward and the triangulation is absolutely not extreme, with the result of being able to ride several hours in the saddle without getting tired …….. and here appear as if by magic the other side of this creature that suddenly manages to abandon its carnality in favor of a sentimental side that magically favors also magnificent outings, aimed at the pure enjoyment of walking, where unexpectedly the brutality and strength of this medium manage to shape themselves transforming into sweetness and linearity, procuring immense pleasure in a fluid and flowing guide that you never imagined you could be possible , especially considering the mark of his disposition and his fame.

This is my premise on the Panigale 1299 S that literally charmed me leading me to use it, as well as in the adrenaline shoots for the steps, also in daily outings of 600 km, as well as a touring motorcycle !! Often I went there to the sea or the lake to bathe, or just look at the views.

Moreover, with a very comfortable kit of side bags of sw Motech, however well proportioned and not even ugly, I managed to fully experience its most touristy / sentimental aspect, with great enjoyment. So much so that I finally decided to take a trip with my son, then fourteen years old, to Germany and more precisely Lake Constance, passing through Switzerland and Austria.

The journey on the motorway with panigale 1299 S

I start with the premise that traveling on the motorway with a supersports car contrary to what it may seem, is not bad at all, in fact thanks to its enormous performance power, oversized for road use, you flow to a quiet gas wire between 160/170 km/h without taking a line of air (thanks also to an increased plexiglass), with a safety that a Tourer will never be able to transmit.

Accompanied by the only sigh of the engine that turns slyly in peace, devour the km with a sense of absolute lightness and ease. However, consider that I have always preferred to stand at around 130/140 km/h, for a reason mainly related to consumption. In fact, the Panigale tank carries 15.5 lt of which 4 are in reserve. 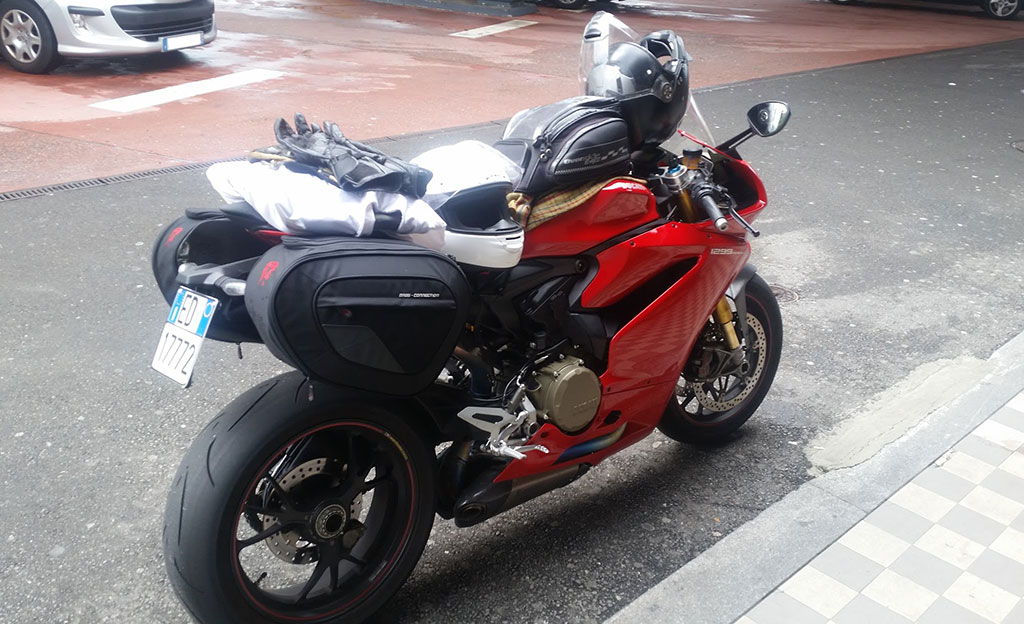 Going constantly I could stop for supplies every 200 km or so, not bad for a 1300 cc bomb. As for the comfort factor personally I had a great time, the forward slanted position I even found it comfortable, especially if I placed my chest on the tank bag.

In addition, the upright position I have always poorly endured, going to overload the kidneys and back causing annoying soreness . My son instead had some problems with the saddle, so much so that after the first 200 km, when we stopped at the distributor, cause sore ass he was almost undecided whether to continue or not !!

But then you know how the boys are made, after a cold drink a sandwich on the fly and hearing the roboante muttering of the boar to a minimum, we were back in the saddle.

At the next distributor we buy a camping pillow to put under the terga of the young hero for the onset of a couple of blisters !! But then everything went well until Meersburg (Germany), the final destination.

Moral of the fairy tale we left early in the morning from Rome and arrived on Lake Constance around 5 pm we traveled more than 900 km without any particular effort. The only problem was at first the passenger seat too small and hard. For the rest it was a beautiful journey, constantly accompanied by the hoarse and stentorian rumble of the engine that ran in all rest.

We quickly cut Italy until we finally got to the border, where mountain roads and breathtaking landscapes took the place of the monotonous highway. There was a general awakening, the made us enjoy crazy putting all the feeling and harmony in crossing those magnificent Alpine steps giving the best of itself, in a combination of nature, colors and scents.

Another aspect worthy of note, are the tires, for the occasion I had mounted the Continental Race Attack 2, a rubber with a clear sporting vocation, but contrary to what you could believe, with a fluid driving and if not brought to high operating temperatures, or in race contexts, their consumption is derisory, in fact we have traveled a total of about 2500 km without having in the least “spittellate” or consumed abnormally , in fact, after the trip I ran again for the steps for another 2000 km or so. 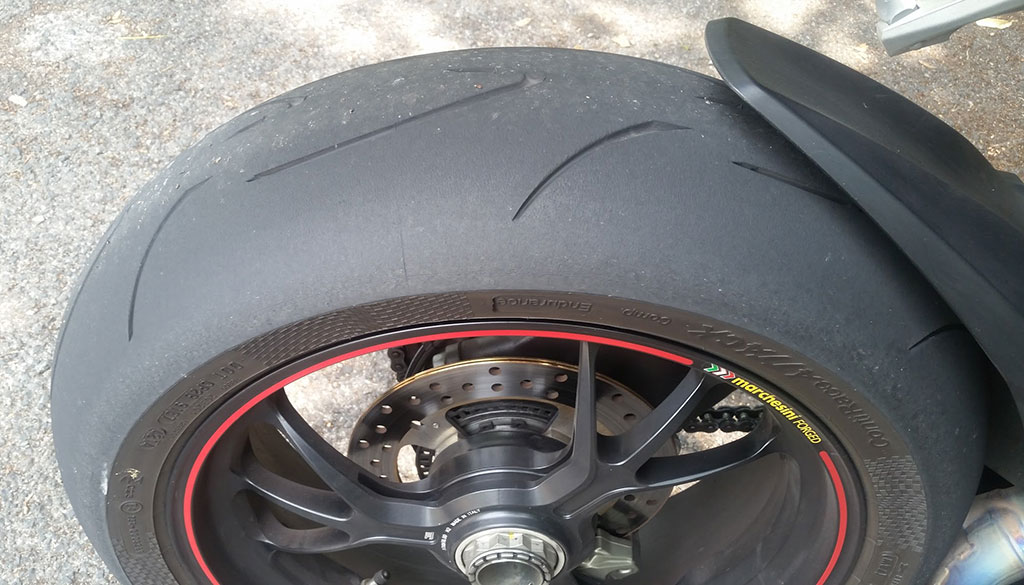 On the day of departure we were accompanied by rain to the border with Italy, and here too the behavior of the vehicle was excellent, always transmitting safety and great support without ever giving any hint of loss of adherence, on the other hand the electronic package of which it is provided is at the highest levels in terms of efficiency and functionality.

In addition, the Ohlins semi-active suspension, have really made a rider difference, the Mechatronic system, always offers the rider the optimal condition depending on the driving style and the route, ensuring unexpected smoothness for a sporty even on disjointed mantas.

In addition, another point in favor lies in the possibility of changing in real time with a simple button the intervention of the traction control even curve after curve !! That is, if, as happened by going up the steps, the asphalt became dirty, it was enough with the button to adjust the intervention threshold of the DTC, which I found of great utility to protect safety.

In conclusion, my experience with panigale 1299 was perhaps the most engaging and in terms of use the most complete, thanks to its hidden travel / sentimental side, but which once discovered was able to give almost all the enjoyment lived at 360 Â°.

The journey made with my son was and will remain a beautiful experience, accompanied by a special means that was able to give us sensations of rare beauty thanks to a perfect combination of motion and nature !!! 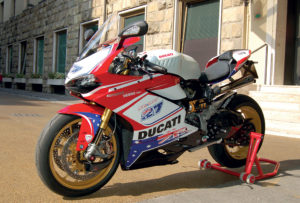