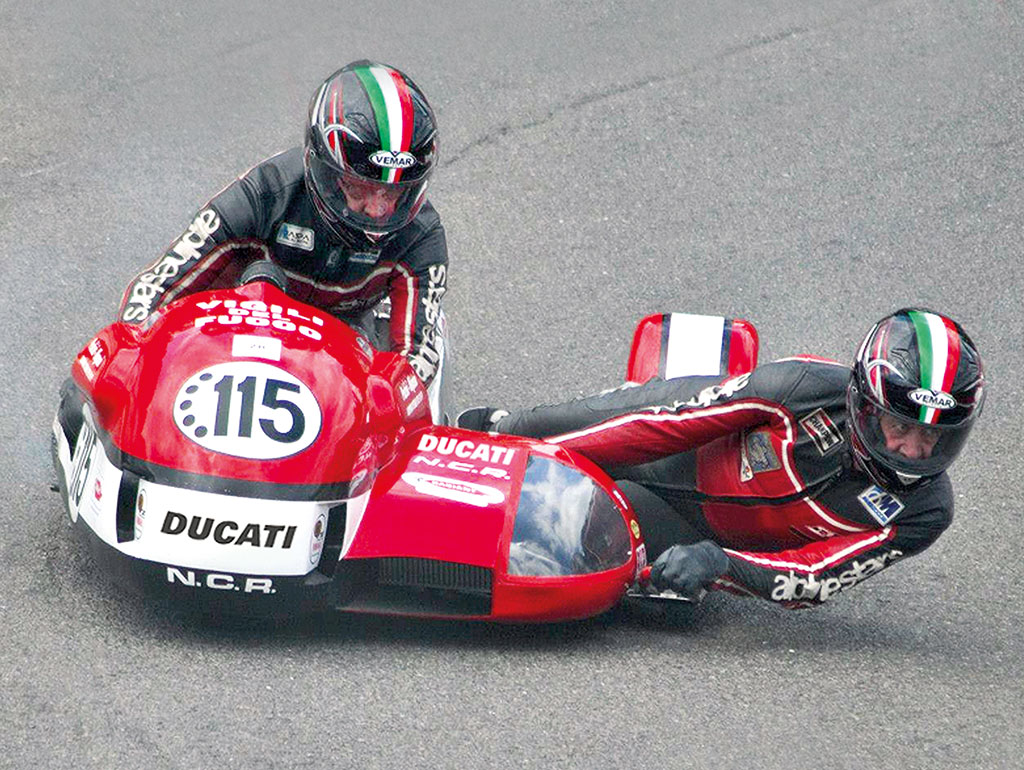 Pedrini and Mignani have set the world record for appearances, boasting half a century of activities as athletes and sidecar manufacturers.

The sidecar, despite being in its own right an exciting, engaging and technical specialty, has never enjoyed the consideration it deserves worldwide. To his credit, it also goes without saying that he was a basic school for many world-class riders,who then established themselves on single bikes. Perhaps the fact that none of the major manufacturer brands have ever made their…

The sidecar, despite being in its own right an exciting, engaging and technical specialty, has never enjoyed the consideration it deserves worldwide.

To his credit, it also goes without saying that he was a basic school for many world-class riders,who then established themselves on single bikes.

Perhaps the fact that none of the major manufacturer brands have ever made their own world championship sidecar entirely (Yamaha, which in fact won 25 rainbow titles in sidecars, merely supplied the engines without designing and also making the chassis) has partly limited the affirmation of these means that have nevertheless had a vast global echo with considerable deployment of means and competitors.

After being present for decades in the World Championship (they usually closed the day of races on the various circuits), the sidecars then played the role of “filler” between the two runs of the Superbike.

Now they have their own world championship (organized by the German Federation), which takes place on a very limited number of European circuits, as part of international events anyway, but has no economic relationship with the Dorna MotoGP World Championship.

In recent years, the Sidecar World Championship has been run in almost all ofEurope, including on the Rieka circuit, but not in Italy. The total rehearsals are twelve and take place in two days (one on Saturday and the other on Sunday).

In recent editions, the title has also gone to Northern couples (even a 63-year-old rider) with finnish rider Pekka Paivarinta iridate with Swiss passengers and in 2016 with compatriot Kirsi Kainulainen,the first woman to become world champion. Lately it was the British birchall brothers who dictated the law, undermined by compatriot Reeves who popped it up in 2019.

In Italy the global trend has been partly imitated and currently the most followed races of this specialty are in fact the historical ones in which we can still boast valuable crews that have imposed themselves in the past at the highest competitive levels.

One of these is undoubtedly the one formed by the Bolognese Roberto Pedrini (driver) and Alessandro Mignani (passenger) who won titles and races on the track and uphill with the colors of the Bologna Fire Brigade and the Moto Club Ruggeri of Bologna. Even after their withdrawal from pure competition (which took place in 1991) they never stopped being present in the events in which sidecar participation was planned.

The passion led them to take to the track in the official historical tests and precisely because of this “irrepressible constancy” they have now taken the satisfaction of setting the world record for appearances in the sidecar sector. For more than fifty years the Bolognese couple has not missed an appointment and in the moments when it does not run it is committed to the construction of sidecars that descend into the race in official tests with other couples: from 1991 to today Pedrini and Mignani have built 18 frames.

From the first sidecar built in the seventies (in the workshop inside the Bologna Fire Brigade barracks that was housed in one of the curves of the Dall’Ara Stadium) to today, the vehicles have undergone a total transformation, so much so that the current sidecars appear more like cars without the cockpit than motorcycle-inspired vehicles as they really are.

Pedrini and Mignani have experienced this evolution step by step, have documented, kept in touch with the few builders still operating in England, and have worked hard in the workshop under the house to stay at the forefront of technology and create models that arouse the admiration of enthusiasts and even of simple observers without mechanical knowledge.

A decisive boost in creativity is direct paternal heritage: Roberto Pedrini, in fact, is the son of Enrico who has been a technician of great inventiveness, having always designed state-of-the-art motorcycles and engines and working with excellent results, as well as in Ducati, mm of Bologna,Innocenti and Morini.

The desire to improve, however, did not lead Pedrini and Mignani to forget the past and also for this reason they did not make the “big jump” that would have led to the creation of sidecars with the rear engine, caressed as racing cars and with low tires that are also used on Formula 3.

Their great technical baggage remained focused on vehicles with boxed frame, high-low slick wheels and above all driven by front-mounted engines.
The sidecar they currently use was built nine years ago and obviously has a traditional technical approach that allows them to do very well anyway.

A demonstration of attachment to the past also comes from the leather tuts that they habitually use in manifestations; the most used is an Alpinestars that they had as a gift from the company 45 years ago,thanks to the interest of his friend Italo Forni, bolognese ace of Italian motocross. 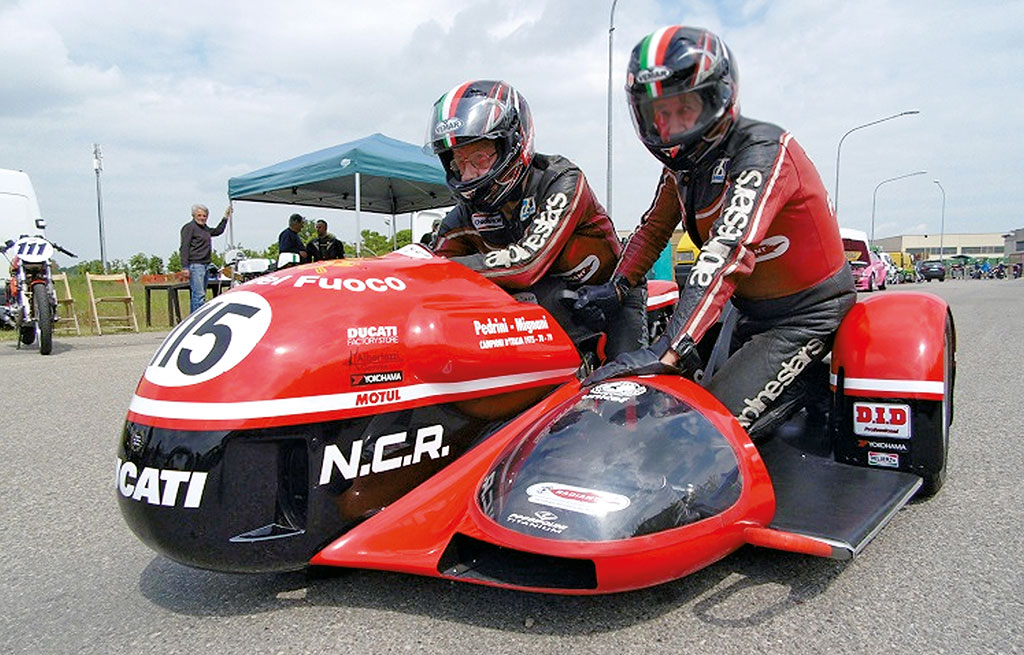 The passion for sidecars in Pedrini came naturally, given the family precedents, so much so that he began to compete already in 1968, as a passenger, on the Vallelunga circuit, while carrying out the training at the national center of the Fire Brigade of Rome.

Back in Bologna, he made the rider’s jump in 1970 after building his own chassis on which he had mounted a Saturn engine.
The following year he employed an OMB engine (Officine Meccaniche Bazzanesi) made by his father with scraps from disused war material.

The birth of the couple with Mignani took place almost by chance: one day he was trying (with a very poor passenger) on the Modena circuit where Mignani, also a fireman, carried out regular service.

He also photographed riders and vehicles (before becoming a firefighter, in fact, he had worked as a professional photographer for the established Bolognese agency FotoWall by Walter Breveglieri).

It was Mignani who asked to try as a passenger because he was interested in it. Pedrini accepted with joy, Mignani climbed on the sidecar in the fireman’s suit and a helmet lent by a friend and was immediately born in full harmony with his work and motorcycle colleague; since then the Pedrini-Mignani couple has started the climb to the national summits.

The first qualitative leap took place in 1972,after obtaining from Ingegner Taglioni the forklift used by Paul Smart in the 200 Miglia di Imola. Thanks to that world-class engine, the Bolognese couple climbed to the top of the Italian championship and also took third place in Zeltweg, in 1973, in the 750 cc category.

She then won the 1975 and 1979 Italian Circuit Speed Championships and 1978 uphill. It also boasts two second places and two third places in the tricolor, 54 wins and 48 second places in speed and climb tests.

Their career was not easy, because to be able to get on the track in the most titled tests they ate all the holidays for years. In order to be able to run with Pedrini, Mignani even got assigned to the detachment of Bazzano because he and Pedrini in Bologna could not be included in the same work shift and thus make holidays and rest shifts coincide.

The general command of the Fire Brigade, in fact, did not include motorcycling among its representative sports (it focused on volleyball, boxing, boxing, gymnastics and wrestling).

They obtained some facilities only after the national leader, Professor Massocco, saw them in action during the conquest of the Italian title in 1975.

Another great difficulty was the finding of the money necessary for the presence at the various competitions: often the Bolognese couple had to sleep in the tent and also for this reason the presence in the world races was very limited, despite the high competitive level that Pedrini and Mignani could have sported.

Although they have never conquered the iris, they have now taken away the satisfaction of setting the world record attendance by boasting half a century of activities such as athletes and builders.

The Italian sidecar, thanks to them, has finally become world.
And the story certainly does not end here …