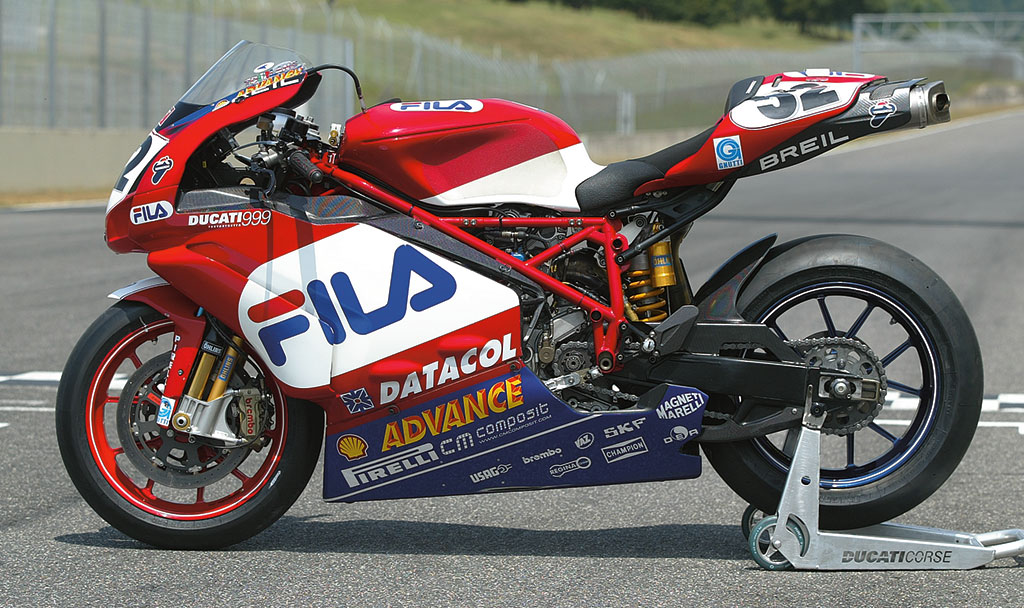 Second and last part of the monograph dedicated to the competitive history of the Ducati four-valve 1000 cc twin-cylinder.

While maintaining the same basic characteristics as the first Desmoquattro, the one born in 1986, the engine of the 998 R has much more extreme specifications than the bike driven by Lucchinelli in the debut season of the SBK championship, with characteristic measurements of 104×58.8 mm against the 92×74 mm of the Ducati 851.

Bayliss’ bike then counts on a bike derived from that of the 916 and the same goes for the bodywork.

The following year, however, the iris went to Colin Edwards’ Honda, which beat Bayliss at the end of an exciting challenge, culminating in the fantastic race of Imola, the scene of a memorable duel in front of 100,000 passionate spectators. 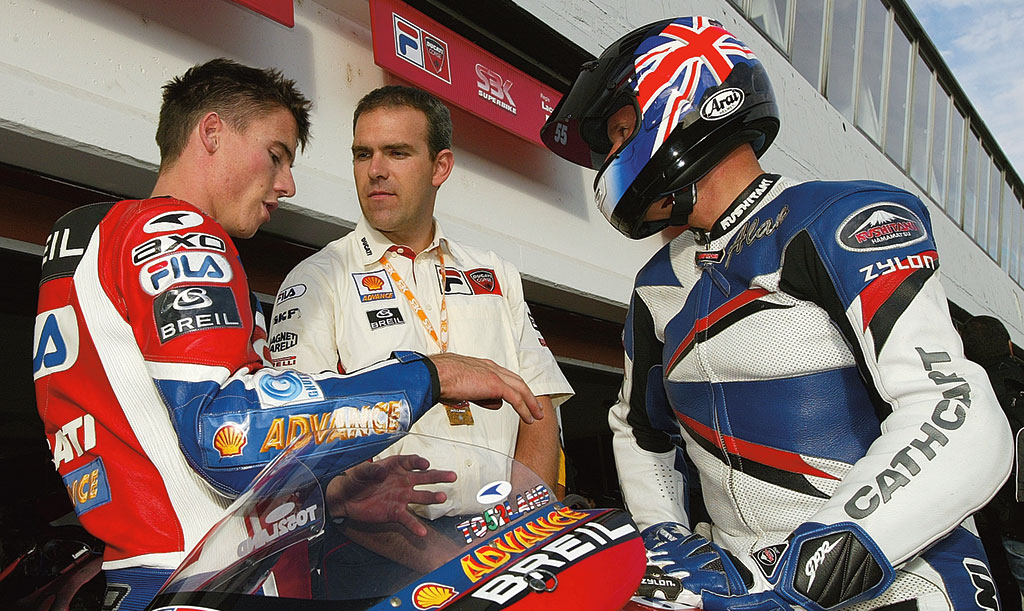 This is how the 998 is retired to make room for the 999 designed by Pierre Terblanche,driven by a version of the NarrowHead further updated. The style of this model, however, does not convince enthusiasts.

Although, on a purely technical level, the 999 is much more rational than the motorcycles related to the 916 family, as evidenced by the choice to adopt a two-arm swingarm instead of one, Commercially, it is not as successful as hoped and Ducati sales rose from 40,000 in 2002 to less than 30,000 in 2005.

This period, paradoxically, represents one of the moments of maximum domination by the Casa di Borgo Panigale in the Superbike championship.

The introduction of new regulations, which allow the participation of the four cylinders of 1000 cc provided that they “wear” the so-called air-restrictors and impose a single tyre supplier, convinces Japanese companies to no longer participate in official form, thus guaranteeing Ducati more than a two-year period of absolute supremacy.

First Neil Hodgson in 2003 and then James Toseland in 2004 they won the title fighting exclusively with their respective teammates. Chris Vermeulen’s third place in 2004, riding Team Ten Kate’s Honda, still represents a sign of awakening by Japanese companies. 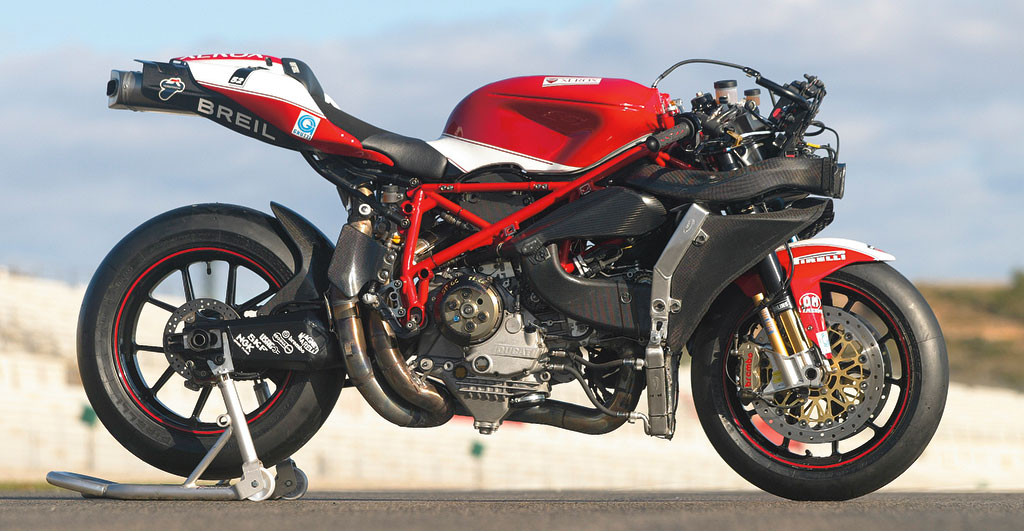 In 2005, in fact, without the absurd constraint on aspiration, Suzuki won its first world title at the hands of Troy Corser, fighting against Vermeulen’s Honda and Haga’s Yamaha, while Ducati was never in the running for the title.

At the end of that season, In fact, Toseland took the podium only seven times out of twenty-five runs, with only one victory to the credit.

All this is the background to the very high management costs that Ducati has come to bear to make its bikes run. The upper part of the engine, in fact, now hasan autonomy of only 750 km,while the low part reaches just 1500.

This is unacceptable, given that 1000 cc four-cylinder engines are now more powerful and more effective in acceleration, also thanks to the use of electronics.

From 2004 to 2007, in fact, the absolute performance of the 999 cc narrowhead (reaming and running measurements equal to 104×58.8 mm) remained the same, i.e. 192 Hp at 12,500 rpm. It takes, therefore, a rider able to make a difference to bring Ducati back to the top of the championship of maximoto derived from the great series production and that rider is undoubtedly Troy Bayliss.

After a three-year stint in MotoGP, in fact, the Australian regains the title on board the 999 F06,thanks also to the sophisticated electronic management of the engine, applied to the 999 after being developed on the Desmosedici.

This allows Bayliss to fight for the title in 2007, but despite the Australian winning seven heats, the gap to Japanese bikes and a nasty injury in England (where he loses the little finger of his right hand) force him to hand over the champion sceptre to James Toseland and his Team Ten Kate-run Honda.

Ducati has, however, played a fundamental role in the Superbike World Championship over the course of those 20 years and the Desmoquattro engine therefore represents a sort of symbol of this era.

Honda and Suzuki, at the turn of the nineties and the beginning of the new century, also adopted twin-cylinder L-engines, but they never reached the same charm emanating from the Ducati engine, not to mention that in terms of victories they are nowhere near comparable.

However, the latest trends wanted the models used in Superbike to be closer and closer to the standard product,according to a regulation that prohibited replacing the main parts of the engine, such as the crankshaft, crankcases etc.

Therefore, the time had also come for the Bolognese House to turn the page, with the introduction of the new 1098 R of 1200 cc.

The ducati two-cylinders with a liter of displacement were therefore definitively destined for the Museum of the Bolognese factory, but they represent a very important piece of the history of this Brand, in addition to presenting a level of technical sophistication such, especially with regard to the latest versions, that they resemble real Grand Prix bikes rather

It was, therefore, the end of a story that lasted twenty years, during which the Casa di Borgo Panigale produced itself in an incredible performance escalation, which led it to collect a series of impressive successes.

Real racing bikes that had to give way to the new one that was advancing, that is to say the 1098 R, but that will certainly not be forgotten by all ducati and Superbike championship enthusiasts.

Davies and Ducati: the story continues

Second and last part of the monograph dedicated to the competitive history of the Ducati four-valve 1000 cc twin-cylinder.